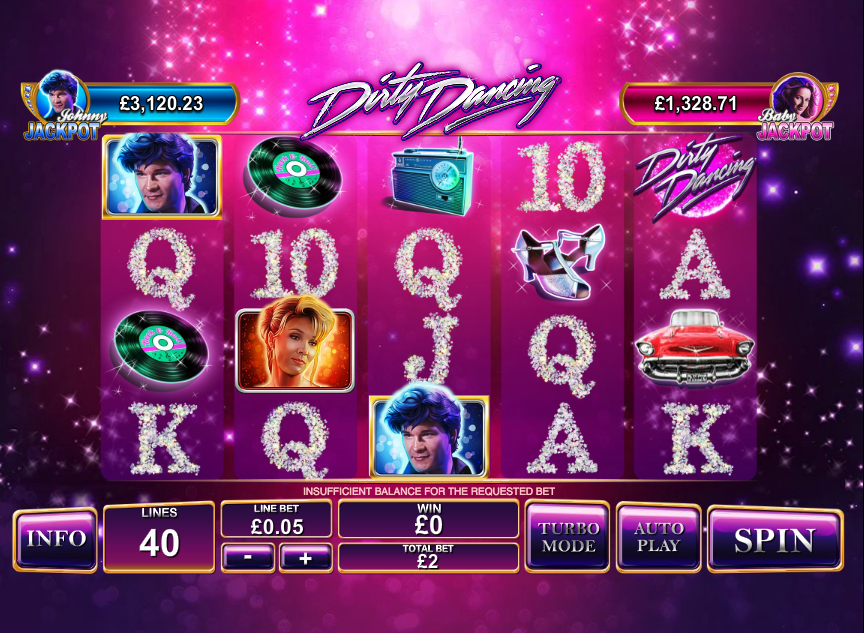 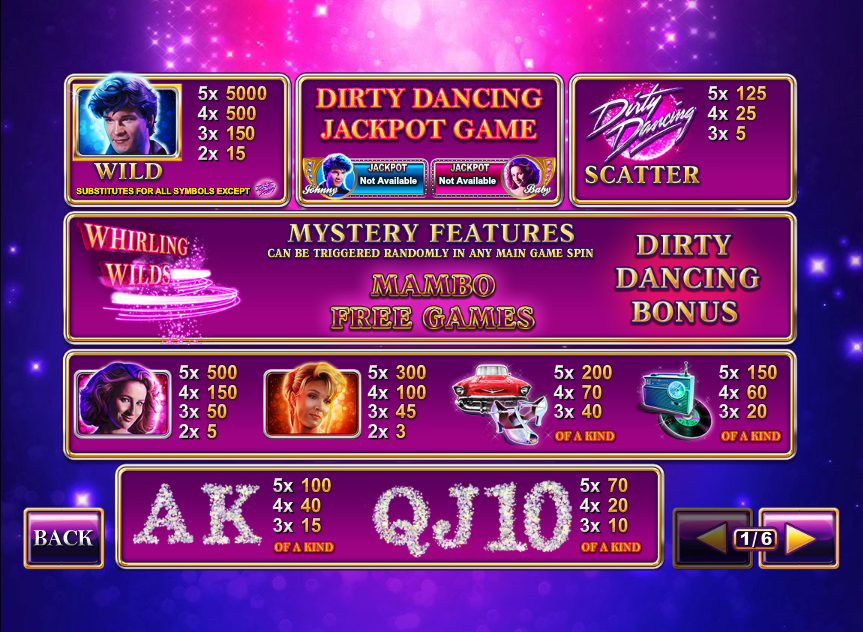 1987 was the year which saw the release of a film which still ranks among the favourites of many a woman (and man) of a certain age; it probably deserves it’s own online slot and that’s what we have here – it’s called Dirty Dancing, it comes with a progressive jackpot and it’s developed by Playtech.

Dirty Dancing is a five reel slot with four rows and forty fixed paylines; a tune from the soundtrack accompanies your gameplay and the reels spin in a haze of pink and purple stars.

The high value symbols include Francis ‘Baby’ Housman, Penny Johnson, a contemporary red car, a pair of dancing shoes, a transistor radio and a vinyl record; 10, J, Q, K and A are the lower values.

Johnny Castle (Patrick Swayze) is the wild symbol and he’ll substitute for all others to make winning combos except for the Dirty Dancing scatter icon.

All the features in this game are triggered randomly on any spin in the base game:

You will be asked to spin a Wheel of Fortune to gain free spin, multipliers and Dancing Wilds; each item gained will leave a space on the wheel and when you land on two empty spaces the spinning is over and the spins will begin. Dancing Wilds occupy all positions on a reel and will move around on each spin.

Johnny and Baby will dance across the reels, placing up to six wild symbols onto the reels after which any payouts will be evaluated.

This is a picking game in which you must find three matching symbols, win prizes and advance to the next level; there are six stages and if you can advance all the way through you’ll get to the jackpot game. This is where you win one of the two progressive jackpots it’s also a picking game where you can win the Johnny or baby jackpot.

Dirty Dancing is a effective reminder of the classic 80s film and as a slot it’s good fun to play as well; the features seem to trigger reasonably regularly, it has the extra draw of a progressive jackpot and an RTP of 94.49%.