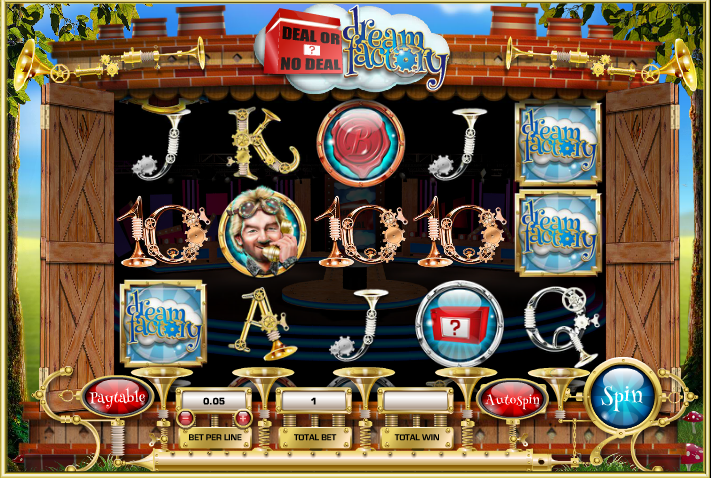 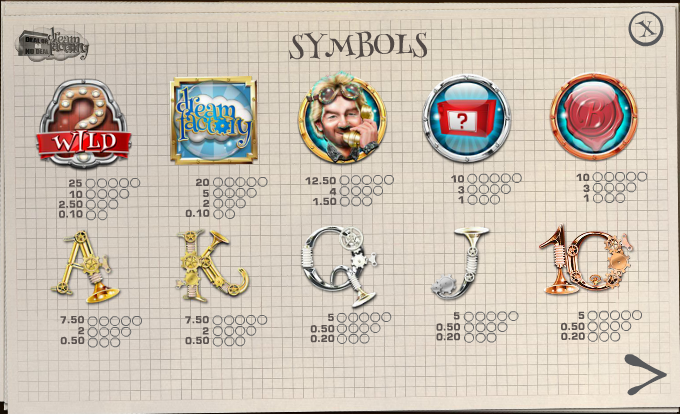 Deal Or No Deal is the largely pointless television show which thankfully is no longer on our television screens; however it has spawned a number of online slots developed by Endemol and Dream Factory is one more to add to that list. It’s perhaps the most in-depth of the lot and it’s all explained in more detail below.

Deal Or No Deal: Dream Factory is a five reel slot with three rows and twenty fixed paylines; we’re not in a television studio this time but the reels are spinning within a shed-like structure (the Dream Factory?) in a green field somewhere.

There are four high value symbols including the game’s logo, Noel Edmonds, a red box and a wax seal; 10, J, Q, K and A make up the lower values.

The big question mark represents the wild symbol and this will substitute for all others to form winning combos except for the telephone bonus icon.

There are two extra features which are triggered randomly within the base game:

This is triggered by landing three of the telephone scatter symbols on reels one, three and five; now you need to pick one of the famous boxes to determine one of five bonus rounds (or click on Noel for an automatic pick):

Super Deal – play the game for real, picking random boxes to try and increase your prize while fending off offers from the banker.

Walk Of Wealth – pick bubbles to progress through five cloudy levels and win better prizes the higher you go; if you make it to the end of level 5 there’s an option to take 150x your stake or have a go at the Super Deal Game.

Red Mist – this is a free spins round with three initially awarded but before they start you must spin a Wheel of Fortune to determine which of the five low value symbols is wild; keep spinning to turn more wild until you land on the same one twice. More spins can be triggered during this round.

Play It Again – this is another free spins round and the number of spins is determined by playing a mini-game of Deal Or No Deal and agreeing that amount with the banker. If you’re lucky the banker might multiply your winnings by up to 10x when the round has finished.

What’s certainly true about Dream Factory is that it’s way more entertaining than the television show; it’s designed to a high quality, there are loads of extra features and it comes with an RTP of 93.86%.