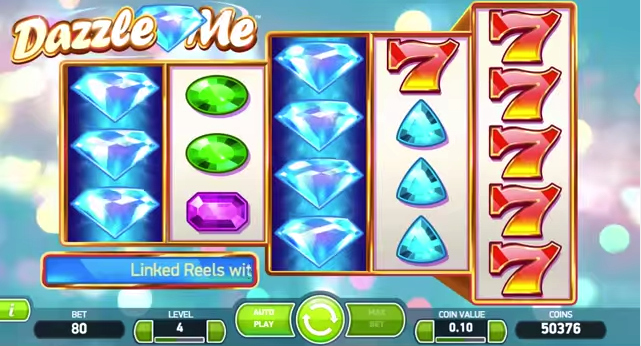 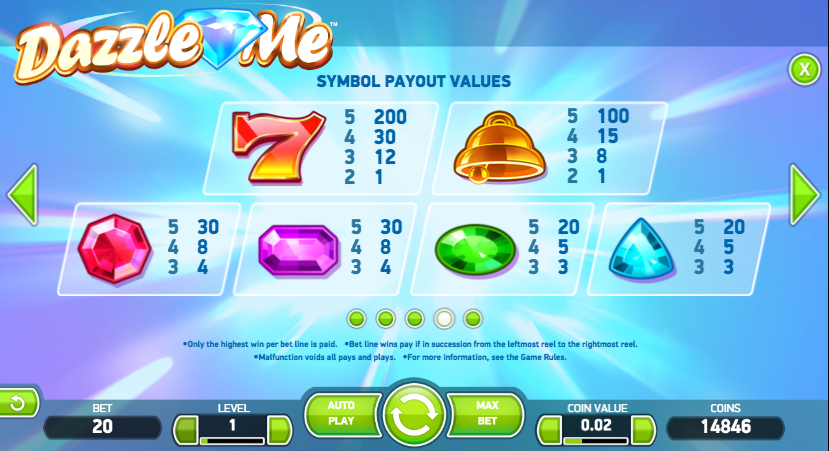 It’s usually a good day when we get to check out a brand new online slot from Net Entertainment; this one’s called Dazzle Me and while we got wind of it some time ago only now do we have a chance to review it properly. It’s instantly recognisable as a Net Ent game with a fairly minimal design and in-game bonus feature but there’s a little more also – read the full review below.

Dazzle Me is a five reel slot with a variable number of rows (as you can see from the screenshot above) and seventy six fixed paylines; the backdrop to those reels contains a sprinkling of lights as seen through a hazy filter.

There are only six symbols, two traditional ones – a bell and a seven – along with red, purple, green and blue gems. The scatter symbol is a ‘Free Spin’ icon which activates one of the features.

This is a base game feature and it’s triggered randomly – at any point, between one and five of the reels will turn completely wild to help out with winning combos. You won’t always win but if you can get more than one wild reel there are some big wins on offer.

This is triggered by landing three or more of the scatter symbols anywhere in view for which you will receive:

The spins will start automatically and feature Linked Reels – anyone who’s played Net Ent’s Twin Spin will spot some similarities here and on each spin either reels one and two or reels three and four will display identical symbols.

As with the dazzling wild reels, this doesn’t mean wins are guaranteed but they tend to be big when they do hit. Extra spins cannot be re-triggered from within this round.

Dazzle Me is definitely worth playing but we’re not sure it reaches the lofty standards of some other Net Ent slots; the bonus features seem to be a mix from other games rather than totally original. Still it’s good fun and comes with an RTP of 96.90%.