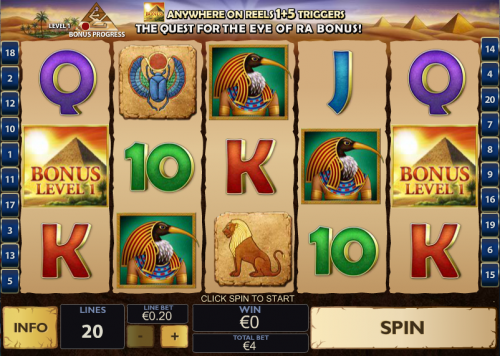 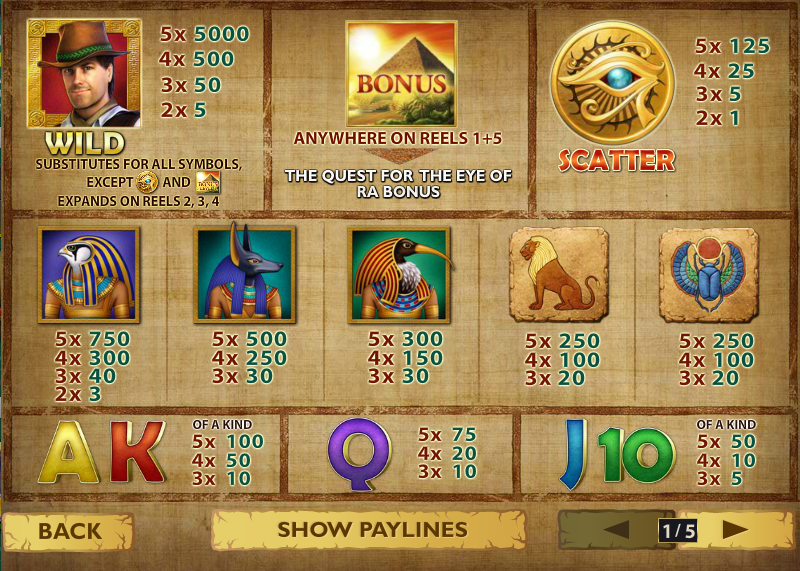 We’ve noticed over the years a tendency amongst games developers to use the theme of ancient Egypt as a basis for their online slots; Daring Dave & The Eye Of Ra is another such game and this time it’s Playtech who have picked up the mantle, designing a game featuring an Indiana Jones-like character searching for the Eye Of Ra.

It’s a simple looking slot in keeping with Playtech’s style but there’s an Egyptian theme running all the way through – in the background we can see the pyramids while all the higher value symbols are theme-related with a variety of Egyptian gods on show.  Daring Dave is the wild symbol, a pyramid is the bonus symbol and the Eye Of Ra is the scatter symbol.  The lower value symbols are Playtech’s standard playing cards.

The Quest For The Eye Of Ra

This is the main bonus game and is triggered by landing the pyramid bonus symbols on reels one and five; your task is to work your way through three levels by completing certain tasks at each stage as follows:

The extra good bit is that if you fail to get all the way your progress will be remembered for your next attempt; ultimately this means that of you make it to the final room on your third attempt, the win is guaranteed.

Daring Dave is the wild symbol and if you can land him on reels two, three and four he will expand to cover all reels, providing more chances for winning combos.

Playtech rarely fail to deliver and this slot is no exception; standard gameplay graphics may not be the most sophisticated but the bonus game and the way it saves your progress are a nice innovation.

There are five reels and twenty fixed paylines meaning that the minimum stake per spin is £0.20 up to a maximum of £40.00.