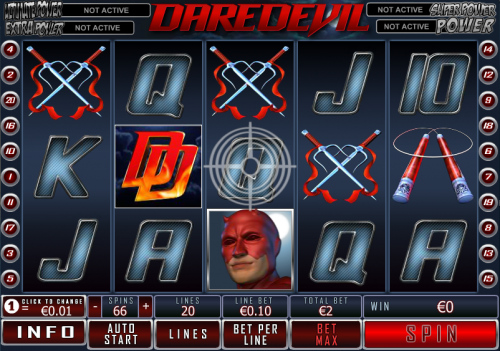 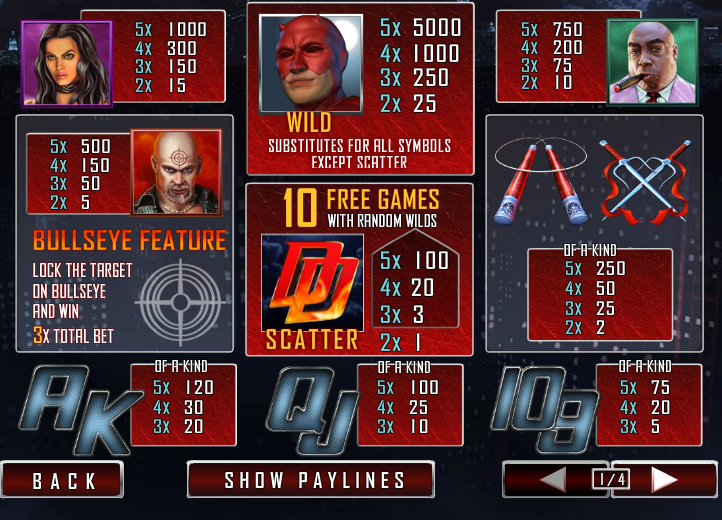 The rash of movies based on Marvel superheroes have produced some exciting films over the past few years but one which was perhaps not quite so well received was Daredevil.  Ben Affleck played our hero, blinded in a radioactive accident but who uses his other heightened senses to foil crime and gain revenge for the murder of his father.

Playtech are the company behind the Daredevil online slot and so it looks similar to their other Marvel slots – clean lines and big clear symbols are the order of the day. Players will be familiar with the playing card symbols which represent the lower values but the higher value symbols are all theme-related.  We have nunchucks and Japanese daggers, Kingpin, Elektra, Bullseye and Daredevil himself.  Our hero is wild and there’s a double D symbol as the scatter.

The Bullseye is a nice innovation which makes the game a little more interactive; there’s a floating target on the reels which you can place over a symbol before each spin.  If the Bullseye character lands underneath the target you’ll win 3x your total bet.  If you don’t pick a new spot for the target it will remain where you left it.

This is the main bonus game and is triggered by landing three Daredevil scatter symbol anywhere on the reels; after each spin Daredevil will randomly turn between 0 and 4 symbols wild to enable more winning combos.  More free spins can be won within the bonus game indefinitely.

Playtech’s progressive Marvel slots jackpot is always worth a mention and it’s triggered randomly, although the higher your stakes the more chance you have of playing the jackpot game.  There are four levels of jackpot as follows – Power, Super Power, Extra Power and Ultimate Power.

Daredevil slots is certainly better than the movie and it conforms to the high standards set by Playtech’s other Marvel slots.  If you’ve played other Marvel slots then you’ll pretty much know what to expect.  Minimum bets are €0.10 per payline and it’s possible to play with stakes of €1000 per spin with everything maxed out.