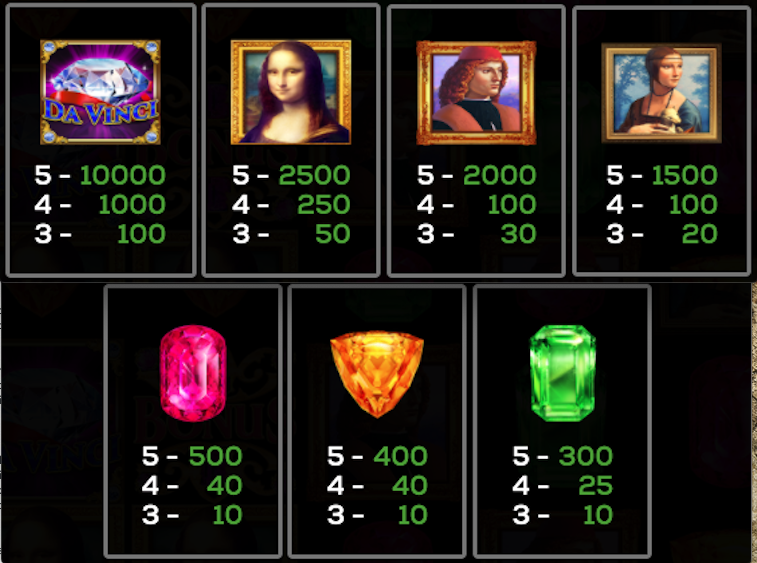 Surprisingly the multi-talented Leonardo Da Vinci has been the theme of quite a few online slot machines and now he’s back in Da Vinci Extreme, this online slot from High 5 Games which offers players free spins and tumbling reels.

Da Vinci Extreme is a five reel slot with three rows and twenty fixed paylines; an ornate, golden picture frame surrounds those reels which float against a backdrop of some Italian location after dark.

The them-related symbols include the Da Vinci diamond and the following pieces of art – Mona Lisa, Cecilia Gallerani and ‘Portrait of a Young Man’; red, yellow and green gems make up the lower values. The wild is a complex, golden ‘wild’ which appears only on reels two, three and four and which will replace all standard symbols to help form winning combos while the ‘Bonus’ symbol will activate the main feature.

Always a favourite, any symbols in a winning combination will disappear and be replaced by more falling in from above – new combos can then be formed and this process continues until there are no more wins.

Landing at three of the bonus symbols on reels one, two and three on an active payline will award an initial six free spins but this feature may also be awarded at random on a spin when no bonus symbols appear.

During this round landing three, four or five of the bonus symbols anywhere i view will award the following extra spins (up to a maximum of 300):

Da Vinci Extreme is a perfectly playable slot but it’s extremely similar in looks to older games such as Da Vinci Masterworks from IGT; we’re not sure if there’s a connection or not but you’d have trouble telling them apart. Still, everyone likes tumbling reels and free spins so give it a go.