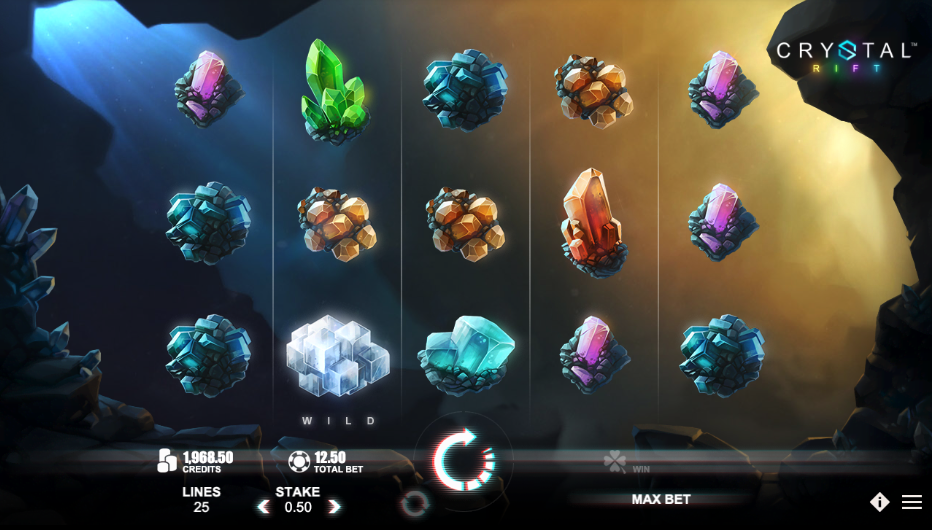 Rabcat have a habit of designing some of the best online slots we’ve played and so we are pleased to bring you Crystal Rift, another stunning-looking game with a clever bonus feature and an atmospheric soundtrack – read all about it below.

Crystal Rift is a five reel slot with three rows and twenty five fixed paylines; the action takes place inside a large cave which is barely lit by the sunlight emerging in the top left hand corner. A mysterious yellow glow emanates from the right hand side.

There are eight standard symbols and they are all crystals of various colours and shapes; the wild is a cluster of transparent cubes which will substitute for all other symbols to help form winning combos. On each spin you will also notice a random grid pattern visible behind the symbols but we’ll explain this a bit further down.

Each winning combo in Crystal Rift will disappear and be replaced by more symbols falling in from above; this process can continue with more winning matches until you reach three at which point the Wild Grid feature kicks in.

On each spin one of the patterns made up of hexagons below will appear behind the symbols; three winning Bonus Falls in a row will light up these positions which will then be replaced by wild symbols. The next spin will then include those wilds and (hopefully) result in a win. More winning combos can then trigger the feature again.

Crystal Rift looks amazing and it has the gameplay to match with its clever features; the brooding soundtrack adds the perfect atmosphere to this slot which (as you can tell) we highly recommend.