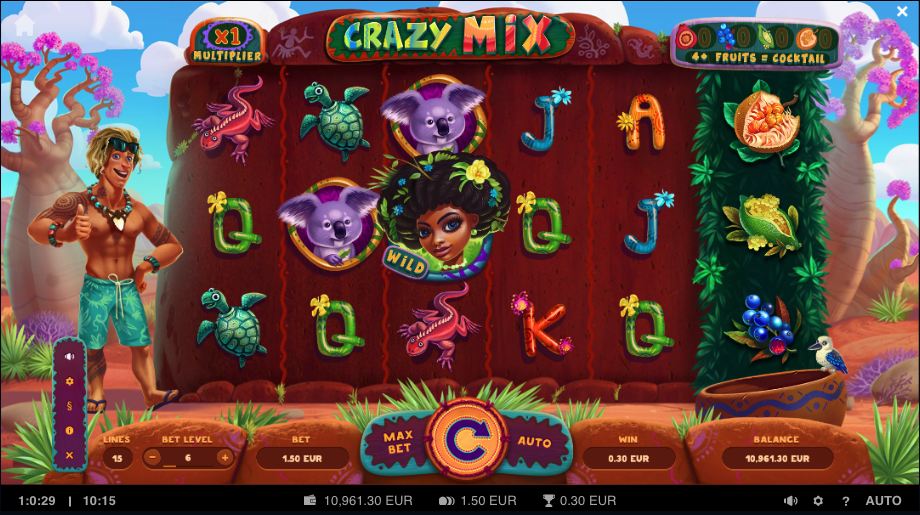 Australian stereotypes abound in this colourful online slot from Yggdrasil Gaming – witness boomerangs, strange fruit and an obligatory surfer dude in Crazy Mix, a game which offers a sixth bonus reel along with Boomerang Respins and Cocktail free spins.

Crazy Mix is a five reel slot with three rows and fifteen fixed paylines; Chuck the ruler stands to the left of those reels, winking occasionally while the bright flora and fauna of this outback location provides the backdrop.

High value symbols include the koala, the turtle, the lizard and the kangaroo while J, Q, K and A make up the lower values; there are two wilds – Chuck and Aneka – and the sixth reel which contains only fruit.

This is triggered whenever the Chuck wild symbol appears on the reels after which he’ll fling his boomerang towards the fruity sixth reel, dislodging some fruit and adding it to the cocktail above; if he catches the boomerang on its return another respin is awarded and the multiplier for any wins during this feature increases by 1x.

Crazy Mix is probably the best Australian-themed slot we’ve tried to date and as usual Yggdrasil comes up trumps; the graphics, the action and the clever features are top notch and the whole package comes highly recommended.

The Return To Player percentage for Crazy Mix is 96.35%.

How To Win On Crazy Mix?

Land winning combos of at least three matching symbols or wilds starting from the left hand side. Trigger one of the features.

Where can I play Crazy Mix?