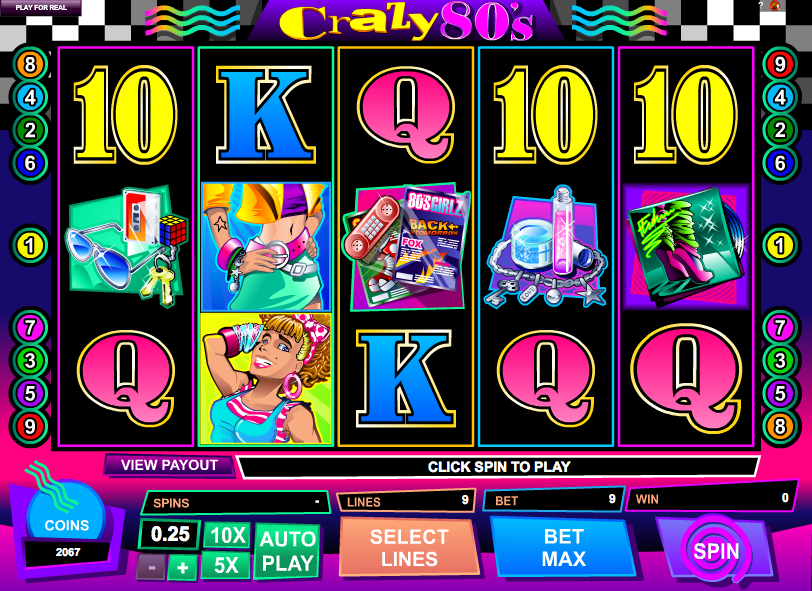 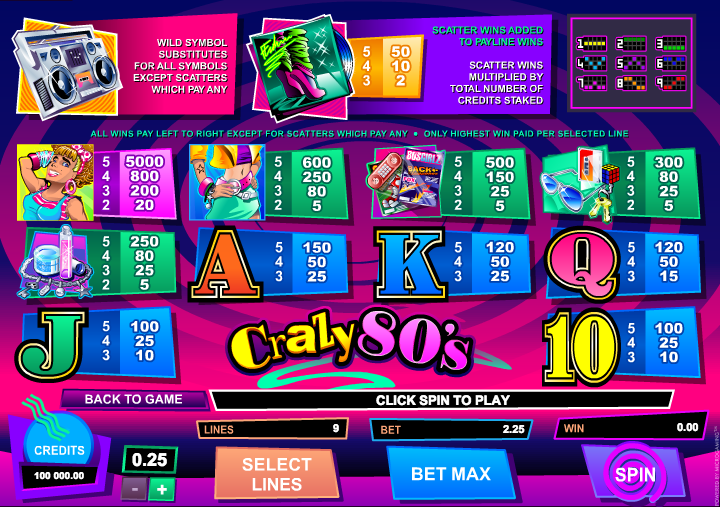 If you were a fan of the artistic output of the 1980s then our respect for you has just diminished ever so slightly; there’s no argument about it, the 80s were the decade that taste forgot in terms of music, clothing and haircuts. There’s no harm in designing an online slot about it though and it’s not the first one we’ve played – Net Entertainment’s Super Eighties is also worth checking out – but this one is made by Microgaming.

Crazy 80s plays out over a technicolor five reels and just nine paylines and although we had to quickly turn the sound off, we heard enough to know that it has a definite 80s vibe to it.

10, J, Q, K and A are the standard low value symbols but higher up the scale there’s various them-related items such as dodgy jewellery and make up, a rubiks cube and an audio tape, contemporary magazines and a couple of fashion disasters. Bonus symbols include a ghetto blaster wild and an ‘ankle warmer’ scatter.

Normally at this stage of a review we would write about the bonus features included in the game but Crazy 80s is so crazy it actually has none whatsoever. This is a real disappointment in a game such as this and it seems that Microgaming are aiming this slot at a very specific demographic of of players who are happy to play five reel machines with no features.

Advice is in short supply when all you can do is pick the paylines and choose the bet amount. Frankly our advice would be to play something else; if you really want to play an 80s-themed game then the Net Ent one mentioned above is a better bet.

You can probably already tell that we don’t rate this game; not only does it have no bonus features, it’s subject is the decade that would be better wiped from all our memories. Still, if you like that sort of thing don’t let us put you off.