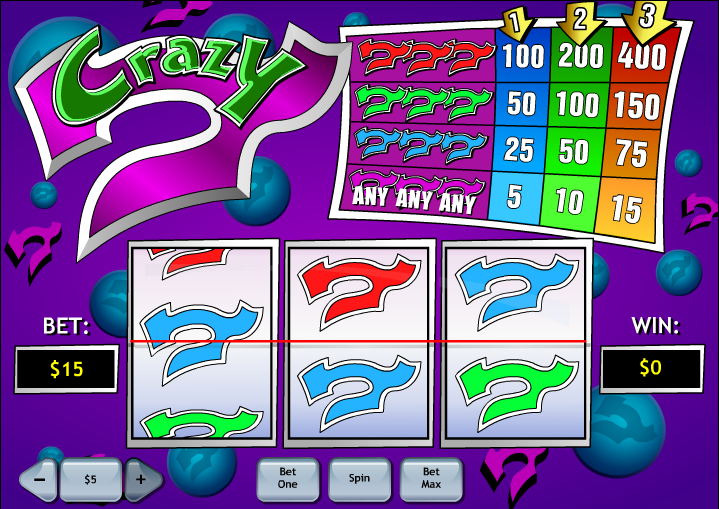 As some Prime Minister or other once said, it’s time to get back to basics; he probably wasn’t referring to online slots but perhaps, in a subconscious way, he was – we’ll never really know for sure. Anyway the basics we are getting back to is called Crazy 7 and it’s one of the simplest Playtech games you’ll play.

Crazy 7 is a three reel slot with one row and just a single payline; it’s all very colourful but purple dominates proceedings. The reels occupy centre stage and you can see the paytable above that.

The only symbols on show are sevens which makes everything even more simple than one might imagine; they are red, green and blue with reds being the most valuable and worth 400x your stake for three on the payline at the maximum coin level.

The only other feature of note is the ability to form winning combos with any three mixed colours which pays 5x your stake.

As with other slots of this nature there’s an inbuilt advantage to betting at the maximum coin level because the highest win is proportionally greater when doing this; the stake is 3x as much but the prize is 4x so our advice is to bet at the three coin level.

Well you know what you’re getting with games of this nature and those who like them won’t have any complaints with Crazy 7. The sound effects are quite amusing, at least for a while and although this isn’t our cup of tea, classic slots fans will find something of value. The RTP is a healthy 97.21%.