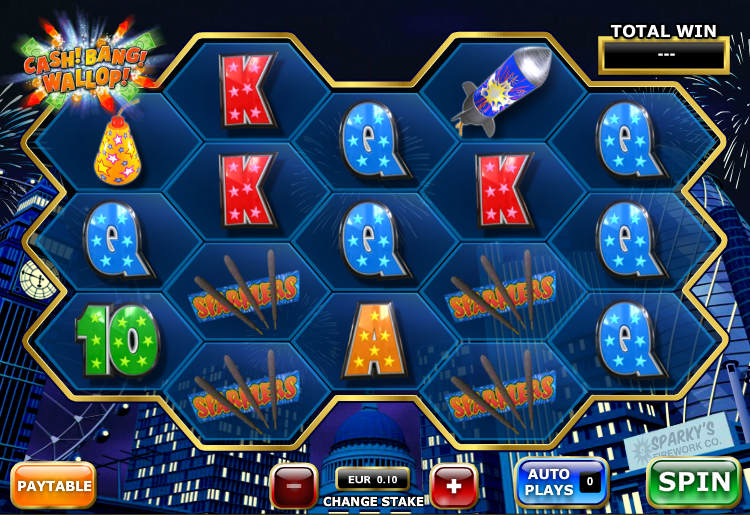 When is an online slot not exactly what you’d expect from a slot machine? When it’s something like Cash! Bang! Wallop!, a game which begins with a cacophony of light, sound and colour and continues in pretty much the same vein.  It’s a game from Ash Gaming based around a fireworks display with an interesting twist on the traditional five reel format. 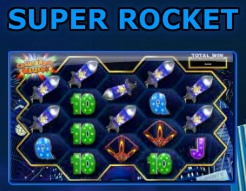 This slot does in fact have five reels but as you can see from the screenshot above alternate columns have either three or four symbols.  Rather than collecting matching symbols on paylines, prizes are won for forming groups of symbols and this means there are an astonishing 118,700 ways to win.

The mains symbols are a selection of fireworks which we’ll explain in detail a little further down the page while the minor symbols are 10, J, Q, K and A.

Special symbols are the random character of Sparky McFlame and the bonus box of fireworks which activates the bonus feature.

This flaming character emerges from the Cash! Bang! Wallop! sign in the top left and lights random fireworks on the screen.  What happens now depends on the type of firework that has been ignited:

This bonus is triggered by landing three of the fireworks box scatter symbols anywhere on reels.  The reels will now respin once with a box of fireworks landing on them.

That box will scatter fireworks across the reels and then Sparky McFlame will light one, awarding you that payout.  If there are any fireworks left following this explosion then Sparky will light another; if you can light five in a sequence another box of fireworks will fall onto the screen.

Reach five boxes along the trail at the bottom and the feature will re-trigger.

If you need waking up in the morning, turn the volume up and play this slot on the biggest screen you have; aside from the noise and colour it’s great fun with small but plentiful wins and some engaging bonus features.