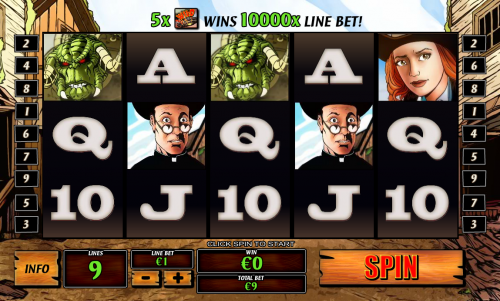 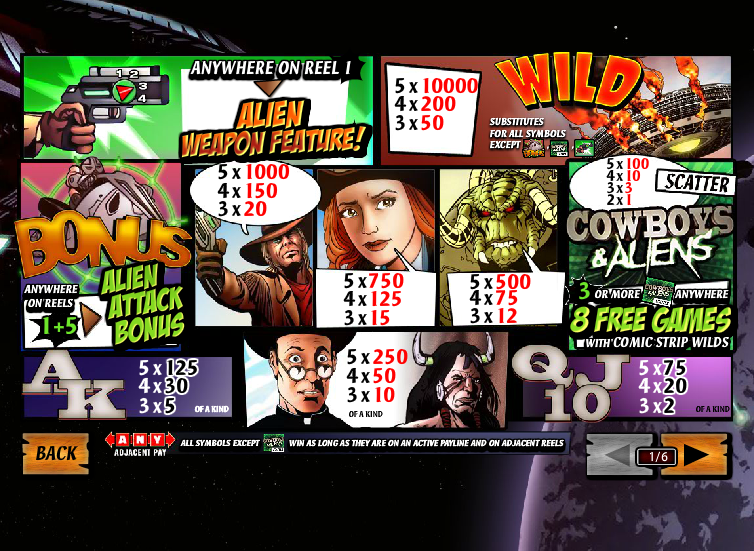 Online slot machines tied in to real life themes often appear at the end of a sequence and Cowboys and Aliens is no exception.  The excellent graphic novel appeared first in 2006 followed by the not-quite-so-excellent movie in 2011; we now have the Playtech-designed slot machine and, unlike the movie, it’s well worth a diversion for a couple of hours.  Of course there’s also the chance to win some money.

While at first glance the graphics on this five reel, nine payline slot machine look a little plain, there are enough funky bonus features and chances to win money to make up for any shortcomings.  The standard 10, J, Q, K and A make up the reels and the special symbols are an alien, our hero, the leading lady, the preacher and a native American.  The wild symbol is a spaceship and the scatter symbol is the Cowboys and Aliens logo.  There’s also a gun logo on reel one which triggers a feature plus bonus symbols on reels one and five.  You can also win right to left as well as left to right.

If you spin the gun on reel one a random value from 1 and 4 will appear on the weapon.  The gun will then zap that number of symbols and turn them into wilds, offering loads more chances for winning combinations.

If you manage to land the bonus symbol on reels one and five you will get the chance to kill aliens; there are three waves of the baddies and you need to choose which alien to target and which character to despatch them with.  Each character has varying levels of ammunition and shooting accuracy and if you pick wisely you progress further, winning more prizes.

Spinning three scatter symbols will reward you with eight free spins; that doesn’t sound like many but with each spin an extra wild will appear, quickly increasing the chances of winning combos.  You can’t win any more spins during this feature but that’s only a small downside.