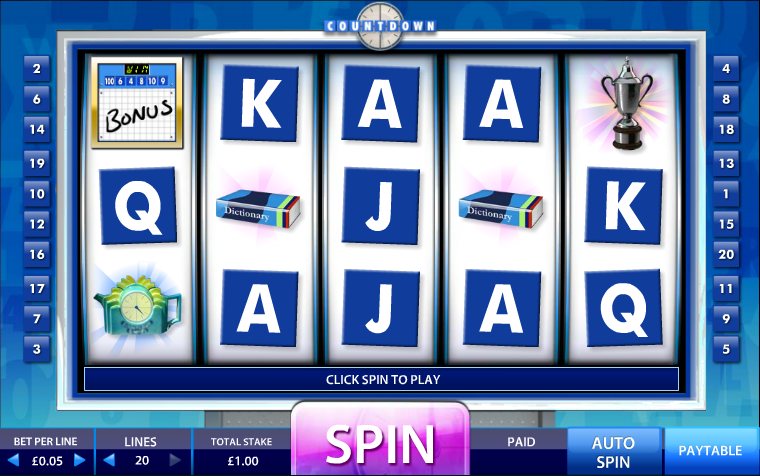 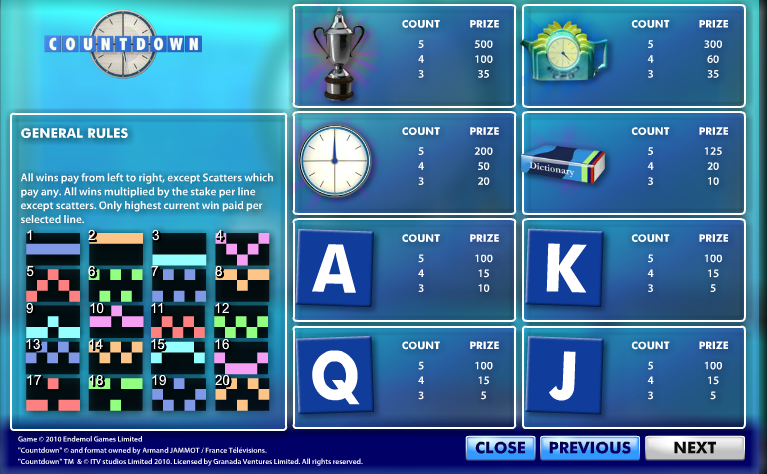 The television gameshow Countdown was first broadcast in 1982 and to this day it provides daily, late-afternoon entertainment for an audience of the retired, students and those with nothing better to do. It certainly deserves an online slot then and here we have one developed by Endemol and containing three separate bonus features.

Countdown is a five reel slot with three rows and up to twenty paylines; the game is designed to replicate that of the television studio and so the graphics, colours and sound effects are all very effective.

The four higher value symbols include the Countdown trophy, the famous winner’s teapot, the even more famous Countdown clock and Susie Dent’s dictionary. J, Q, K and A represent the lower values.

The Countdown logo is wild and will replace all others in a winning combo except for the three bonus symbols – the numbers board, Rachel Riley and a notepad.

This is a free spins round triggered by landing three or more of the numbers board scatter symbols anywhere in view but first you must pick six cards from the twenty eight displayed; this will determine the number of free spins and multipliers during this round. More spins can be retriggered by landing more scatters and it’s also possible to trigger the two other bonuses from here.

Trigger this by landing three of the Rachel Riley scatter symbols anywhere on the reels; you now get to play up five rounds of the letters game in which your word will be compared against your opponents’ word. The further you progress, the higher the prize.

This is triggered by landing three or more of the notepad scatter symbols anywhere in view; you will now see the partially-completed word ‘CONUNDRUM’ (in fact just O, N, O and N) and you must spins the wheel five times to try and earn the remaining letters to complete it. The more letters you grab, the higher the prize.

This is another well-designed slot from Endemol who clearly know how to replicate the atmosphere of any given television show; the three bonus are clever and there’s an RTP of 95.49%.