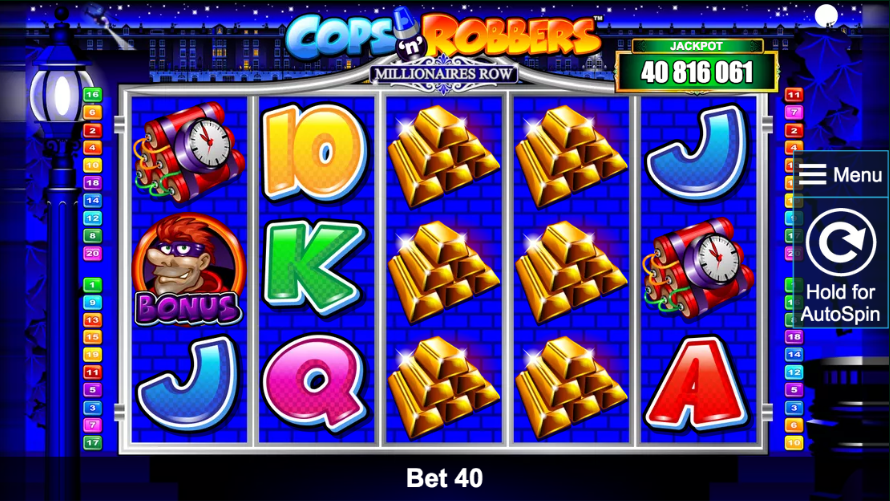 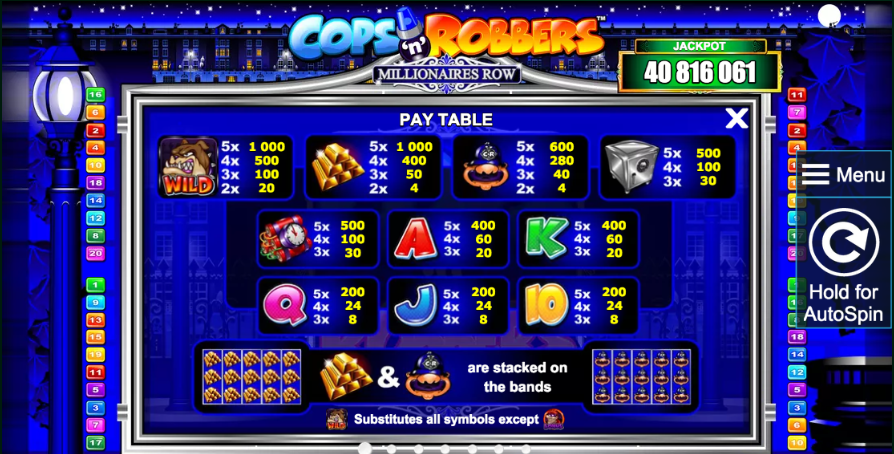 Veteran online slots players will no doubt be well aware of Mazooma’s ever-popular Cops ‘N’ Robbers game with it’s multiple bonus features and quirky gameplay; we now have a sequel in the shape of Cops ‘N’ Robbers Millionaires Row which suggest that the crooks have upped their game somewhat. This releases adds to the original with some update graphics, new games and a progressive jackpot.

Cops ‘N’ Robbers Millionaires Row is a five reel slot with three rows and twenty fixed paylines; it’s graphically similar to it’s predecessor and the reels spin on a blue lamplit wall in front of a row of expensive townhouses, just waiting to be burgled.

The higher value symbols here include a stack of gold bars, a moustachioed copper, a safe and some timed explosives; lower values are represented by 10, J, Q, K and A.

The wild symbol is the bulldog which will substitute for all others to form winning combos except for the robber scatter icon which appears only on reels one, three and five.

After any spin you may be awarded one of five mini-bonuses as follows:

This is the main bonus game and it’s triggered by landing three of the robber scatter symbols anywhere on reels one, three and five; you will now get to play a board game in which you roll a dice to progress and pick up free spins. When you hit one of the green corner squares the free spins will start.

There are four bonus wilds which can appear during the spins:

During the board game you can also collect gold keys on two of the corner squares and during the free spins they can be gathered when attached to the standard symbols. Collecting five in one or both f these rounds will award the progressive jackpot.

Cops ‘N’ Robbers Millionaires Row starts where the original left off but chucks in a progressive jackpot for good measure; it’s quirky, good fun to play and it comes with an RTP of exactly 95.00%.