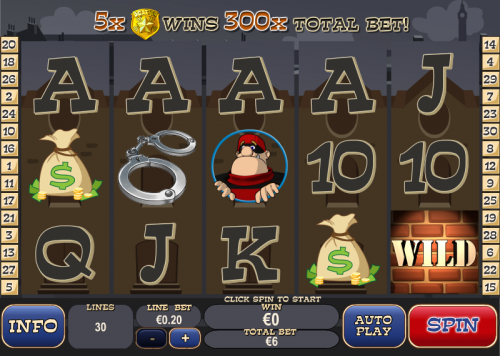 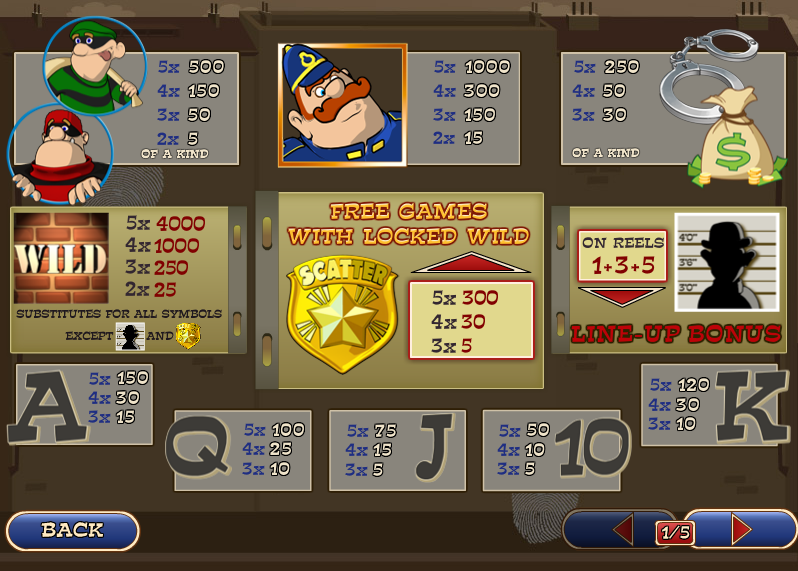 Crime-based online slots crop up every now and again but that doesn’t mean we don’t appreciate new ones when we find them; Cops N’ Bandits is Playtech’s take on this particular genre and it’s well worth a look, containing as it does two bonus games, a funky intro movie and some interesting sound effects.

Cops N’ Bandits is a five reel slot with thirty paylines; the reels are set against the silhouette of buildings at night – perhaps a police station, a prison or maybe the terraced houses about to be robbed by the thieves.

The low value symbols are the standard playing card variety but the higher value ones are all represented by crime-related pictures.  Therefore we have a pair of handcuffs, a bag of money, thieves in green and red clothing and a comedy policeman.  Special symbols are a brick wall wild, a gold police badge scatter and a mug shot silhouette which triggers one of the bonus games.

You can trigger this bonus game by landing three or more of the police badge scatter symbols anywhere on the reels; if you’ve managed to get three you’ll be given the chance to pick one of the badges to reveal the number of free spins to be awarded.  Four or five badges landed will mean you pick two and the numbers will be added together.

During the free spins round the Locked Wild feature becomes active  and this is how it works: if a policeman appears directly to the left or right of a thief, that thief will be locked up and become a locked wild for the duration of the spins.  Locked wilds are only available on reel two, three and four.

This bonus is triggered by landing the mug shot silhouette on reels one, three and five in the basic game; you the take part in a mini-game in which you pick suspects out of a line-up with a view to finding the thief as quickly as possible.  As you can see from the video below, the longer you take to pick the correct suspect, the lower the amount of money you win.

This Playtech slot is great to play; the comedy characters and the complementary sound effects combine with the bonus features to create a an entertaining game.