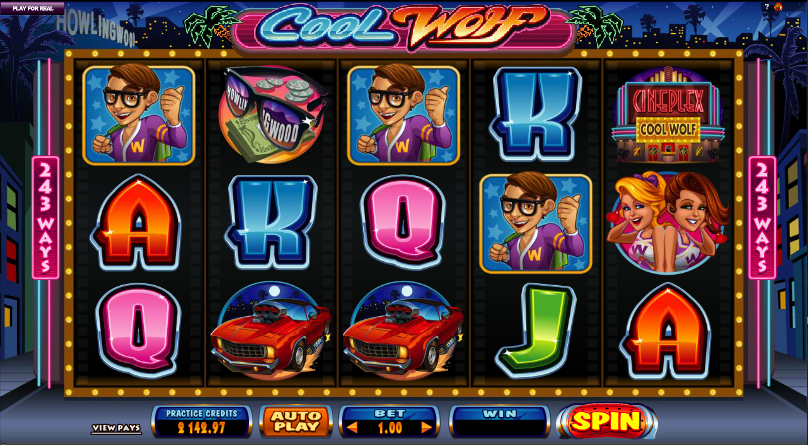 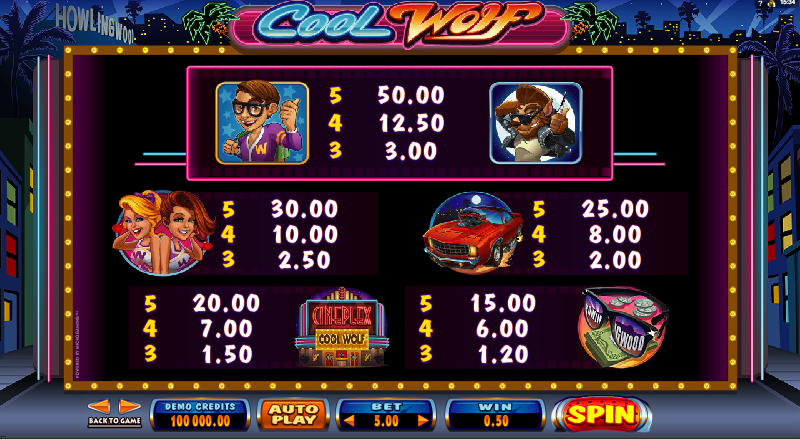 Brand new from Microgaming this May is Cool Wolf, a slightly retro-looking online slot with a werewolf theme. This is no scary subject though – it’s a cartoon version set firmly in the 1950s and the main protagonist is a student who becomes one of those hairy creatures when the moon is full. Read on to find out more about this entertaining game.

Cool Wolf is a five reel game with 243 ways to win which means it’s possible to land a winning combo as long as the symbols are in adjacent reels starting from the left hand side. There are no standard paylines. The backdrop to those reels is a warm evening somewhere on the west coast of America with a ‘Howlingwood’ sign just visible in the top left hand corner.

Aside from the standard J, Q, K and A, the theme’s symbols include some cash and sunglasses, a cinema, a muscle car and pair of young ladies in cheerleader outfits.

The scatter symbol is the cinema ticket and the game’s logo is the wild symbol. Those wilds are stacked on reels three to five which should give the player more opportunities for winning combos.

This is one of our favourite features and whenever you land a winning combo, those symbols involved will disappear to be replaced by others. They in turn can form more winning lines and so on – it’s like getting a free spin each time you land a win.

Three, four or five of the scatter symbols landing anywhere on the reels will reward you with 15, 20 or 25 free spins respectively. During the spins the Rolling Reels are active and each time you land a consecutive win using that method, the multiplier will increase according to a scale above the reels. The maximum is 10x and you can see this in action in the video above.

This is a random feature and at any point one of the centre three reels will turn completely wild. If this doesn’t create a win, the reels will spin until you get one.

The lack of interactivity here means there’s very little we can offer in the way of advice. Keep the funky music on though as it’s one of those rare games where you won’t want to mute the sound.

Sharp-eyed players will notice that this game is similar in style to one of Microgaming’s other new slots, Football Stars. Don’t let that out you off though – it’s of a high quality and all the bonus features mean it’s well worth checking out.