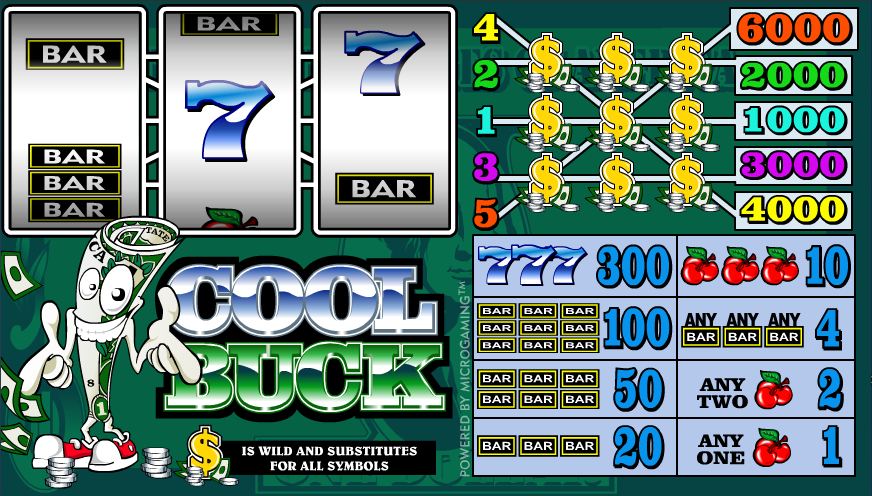 Microgaming have a tradition of turning out some good-looking and very playable three reel slots, especially their range of what we would call UK-style fruit machines. Cool Buck is another classic slot but in the more traditional sense; it’s the sort of simple game you would find in a Las Vegas casino with no bells and whistles but still a chance of hitting it big. Read on to find out more.

Cool Buck plays out over three reels and five paylines and Buck himself is the main character in this game. He’s been created by rolling up a dollar bill, adding some arms and legs and sticking a face on to the finished product. A dollar note also forms the backdrop to the reels.

The reels themselves occupy the top left hand corner while the paytable take sup the right hand side. On that paytable you can see some very traditional symbols including cherries, single/double/triple bars, sevens and golden dollar signs.

The only extra feature in Cool Buck is that golden dollar sign which acts as a wild symbols which substitutes for everything else. It will also pay out the biggest prize which is 6000x your line stake; that’s for landing three gold dollars on payline five – bottom left to top right.

The best way to kick things off is of course by choosing your stake and this is done by clicking the ‘+’ & ‘-‘ buttons underneath the reels. You can then combine this with the ‘Bet One’ button to select the number of paylines for a betting range of between £0.25 – £100.00.

As with most three reel slots, this is high variance which means it will pay out rarely but generously so make sure you have a bankroll big enough to cope with the long winless streaks.

This is an enjoyable enough classic slot and wins to turn up frequently enough to keep things interesting. The addition of a wild symbol spices things up a bit as well.