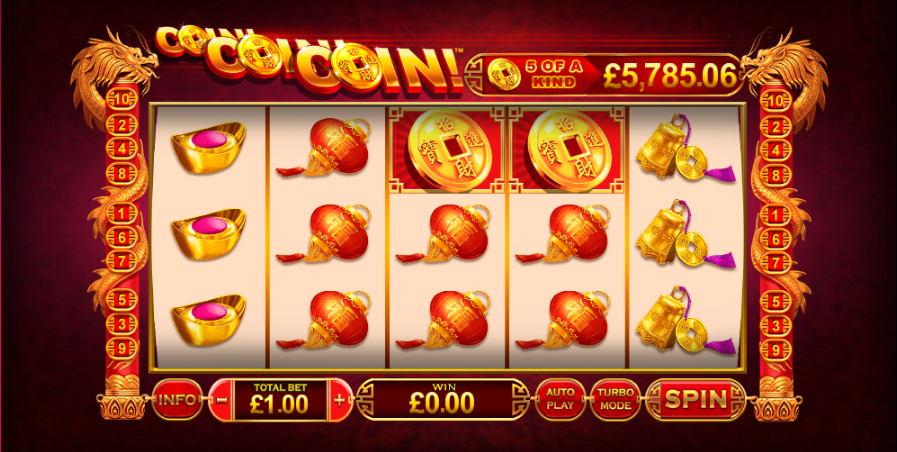 Paper lanterns, lucky cats and gold ingots provide us with an early clue that this online slot is themed on the mysterious and inscrutable Orient; it’s called Coin! Coin! Coin!, it’s developed by Playtech and while it may be short on bonus features, it makes up for that with a tasty progressive jackpot – find out how to win it below.

Coin! Coin! Coin! is a five reel slot with three rows and ten fixed paylines; stylised dragons wrap around the payline columns on either side of those reels and the colour scheme is red and gold, a familiar one for fans of this genre.

The symbols will be recognisable to those who gravitate towards this theme and they include gold ingots, a Maneki Neko lucky cat, a golden tortoise, a Chinese lantern, a pouch of gold coins and a golden bell.

The wild symbol is a gold coin which will replace all others to help form winning combos – it’s also the key to the progressive jackpot which we’ll explain shortly.

The wild symbol will expand to fill all positions on the reel in which it lands to help out with ig wins for the luckier players; it’s all the key to the progressive jackpot because that big prize will be yours if you can land five wilds on an active payline starting from the left hand side. You’ll win the prize amount shown to the top right of the reels and this sum is proportionate  to your stake.

Coin! Coin! Coin! is probably a slot which will appeal to those who like some traditional gameplay, n bonus features but a chance for a shot at the big bucks – if that sounds like you then why not stop by for a few spins?