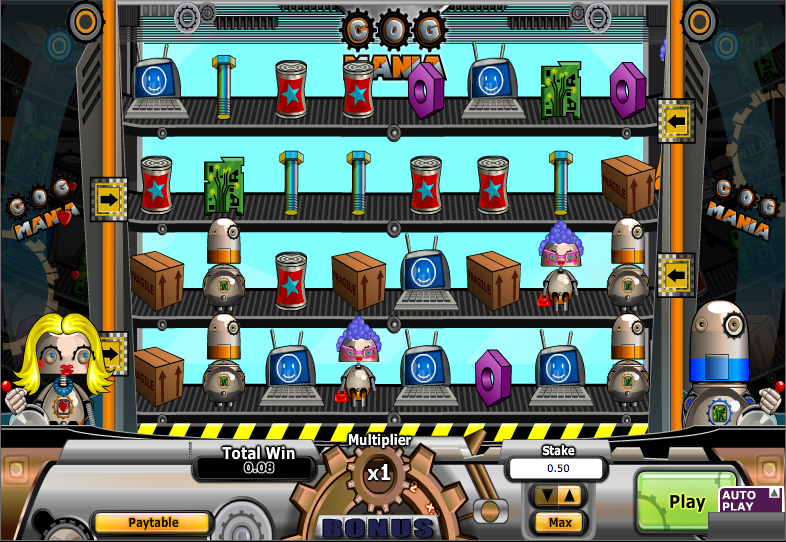 If you want a break from the spinning reels of a traditional online slot then an arcade game such as Cog Mania may just be the diversion you are looking for. Cog Mania is a release from Random Logic Software, it’s available to play at 888 Casino and it’s theme is one of robots and science fiction.

As you can see from the screenshot above, Cog Mania has no reels to speak of but it does have twelve paylines; four horizontal ones and eight vertical ones – you can see these demonstrated by checking out the paytable information.

As this is a robot-themed game there are a range of robot accessories which make up the symbols; we have nuts and bolts, a computer chip, a tin can, a computer, a cardboard packing box, a female robot with a blue rinse and a male robot.

The big silver cog is the wild which can substitute for any of the other symbols on the screen.

There are no separate bonus games as such in Cog Mania but it does include a variation on the freefall feature which appears in a number of online slots.

When you press the ‘Play’ button underneath the reels, the symbols will randomly rearrange themselves and what you are hoping to find when they settle is one or more vertical or horizontal lines of between three and eight symbols. Eight in a row is obviously the biggest winner and if you manage to land eight male robots you will win 10,000x your line stake.

Additionally, all symbols contributing to a win will then disappear; the remaining symbols will move towards the centre of the screen to fill the gaps and others will move in from the sides or top. In this manner you can make more matches in this second phase and as an extra bonus, each replacement will increase the multiplier by 1x.

We like games with free fall features so this is right up our street; it’s not quite a traditional slot but it’s close enough to keep everybody happy. The graphics are nice and the sound effects are appropriately robotic.