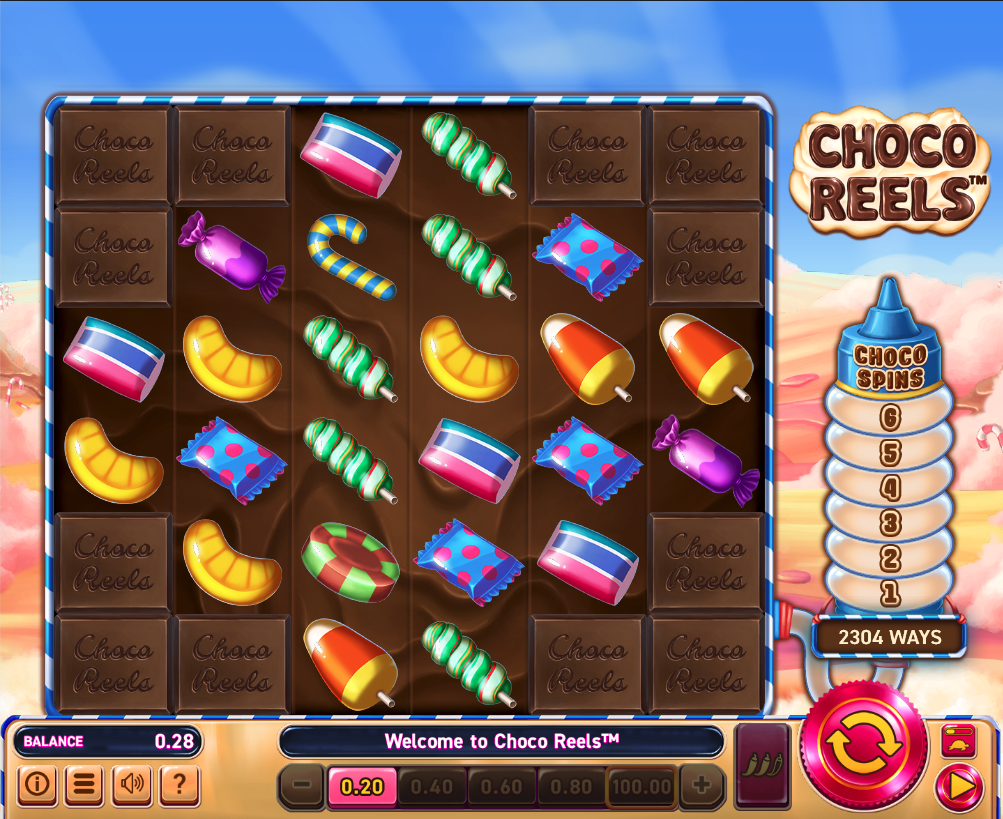 A land made from cakes and chocolate may sound like a recipe for heart disease and an early death but in the world of the online slot machine it’s generally the theme of a game – this one’s called Choco Reels, it’s developed by Wazdan and it promises players collapsing reels, free spins and up to 46,656 ways to win.

Choco Reels is a six reel slot with variable rows and a starting position of 2304 ways to win shown in the screenshot above; ice cream, lollies, candy floss and other sugary treats form the backdrop to those reels with the Choco Spins meter on the right hand side.

The symbols are all related to the theme and include various lollies, colourful boiled sweets and chocolates wrapped in shiny paper; the pink ‘Wild’ is wild and it will substitute for everything except the donut scatter to help create winning combinations.

Choco Reels uses the collapsing reels feature which sees any symbols in winning combos disappear and be replaced by more falling in from above – more combos can the be formed to continue the process.

Each of those winning collapses/combinations will remove two of the chocolate positions, increasing the paylines in the process and also the chances of earning the next win. The image below shows which paylines are uncovered and in what order:

When there are no more wins the chocolate pieces all return to the starting positions and the paylines reduce back to 2304.

Achieving six consecutive collapses in one spin will trigger this feature and fill up the meter on the right hand side; you’ll now get six free spins with a win multiplier which increase by 1x with each spin. The paylines are carried over from the triggering spins which means they remain at 46,656 for the whole round.

Trigger this by landing at last three of the donut scatter symbols anywhere in view and you’ll receive an initial ten free spins; during this round a donut displaying 3FS may appear which will award an extra three free spins. There are 46,656 paylines available during this feature and each win will increase the win multiplier by 1x.

After each win a small button appears to the left of the box where the winning are shown and clicking this will allow you to play a 50/50 game to try and double up your winnings.

Choco Reels is graphically slightly on the basic side but don’t let that put you off because this is a lot of fun; it draws inspiration from older slots with a similar gameplay mechanic but chucks in plenty of free spins and win multiplier also.