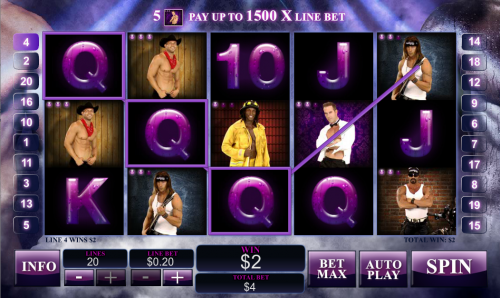 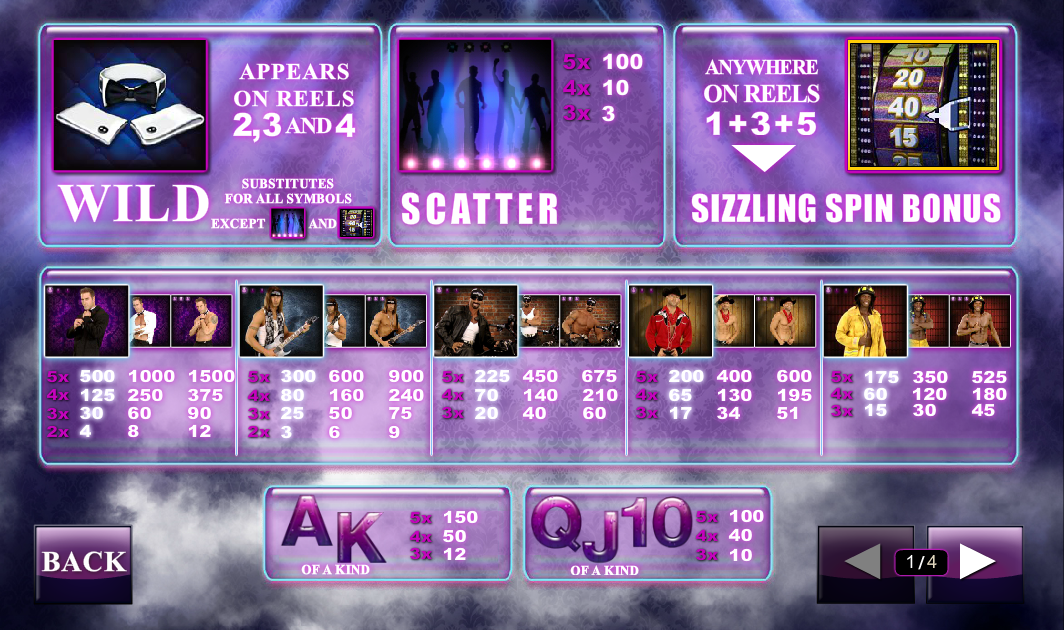 Ladies! Stop what you’re doing and pay attention to Playtech’s latest online slot machine; it’s based on the original travelling band of male strippers which, believe it or not, dates back to 1979 and Los Angeles.  It’s still going strong now so why not use it as a theme for a sizzling slot.

Chippendales is a really well made game; it features five reels and a maximum of twenty paylines and it gives off a distinctive nightclub vibe as you spin the reels.  The soundtrack combines music and the voiceover from a Chippendales performance.

As you might expect the major symbols are represented by a selection of finely-tuned torsos; these gentlemen remain nameless but their outfits are as follows – fireman, cowboy, biker, rocker and James Bond-type. The minor symbols are 10, J, Q, K and A.

Special symbols are a wheel of fortune bonus, a scatter featuring the chaps on stage and a wild symbols showing the cuffs and collar which has become the Chippendales trademark.

Each character has there stages of undress and when you start playing the game they’ll all be wearing the maximum number of clothes.  When you land a winning combo which contains one of the guys they will strip to the next level and become more valuable.  The third level of undress is worth the most money and once you’ve won a prize at that level it will reset to the original clothed state.

You will notice the giant Wheel of Fortune which appears on reels one, three and five as you’re spinning the reels’ if you can land all three in the same spin you’ll get to play this mini-game.

You will see one of the performers spin the wheel to reveal a cash prize and the number that’s shown will be a multiplier of your total bet.

This is a very polished online slot from Playtech which is good fun to play even though it will probably only appeal to a certain portion of the demographic.  The Symbol Strip feature is pretty innovative and the Wheel of Fortune is a welcome extra but watch out for the low RTP of 92.00%.