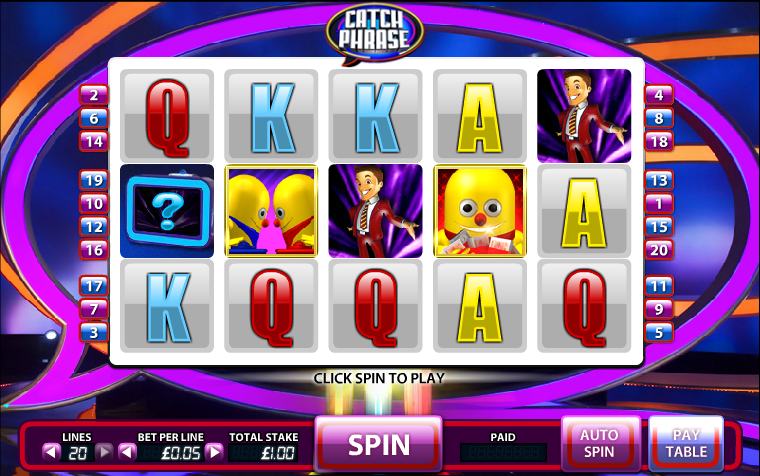 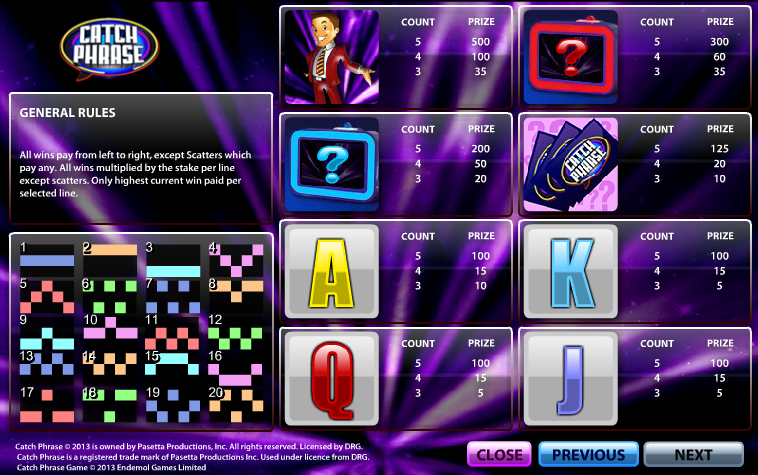 ‘Say what you see’ is the enduring memory from Catch Phrase, a television show in which contestants had to identify a well-known word or phrase from a slowly clearing picture. Endemol have now made it into an online slot machine with three different bonus features and you can read all about it here.

Catch Phrase is a five reel slot with three rows and up to twenty paylines; all the action is set inside a television studio and the design is quite basic, perhaps to reflect the age of this particular show. The sound effects are the original music from the programme.

There are four high value symbols including the suave host (either Roy Walker, Nick Weir, Mark Curry or Stephen Mulhern), blue and red question mark icons and some Catch Phrase cards; J, Q, K and A make up the lower values.

The wild symbol is the Cath Phrase logo and it will substitute for all others to form winning combos except for the three different Mr. Chips scatter icons.

This is triggered by landing three or more of the superhero Mr. Chips anywhere on the reels and you will get to play a picking game in which the task is to navigate across the game board, collecting letters but avoiding the four red ‘X’s which end the round.

Trigger this by landing three or more of the red/blue Mr. Chips scatter symbols anywhere on the reels; here you play against an opponent to guess the phrase and this is done by spinning the wheel and landing on a red (rather than blue) segment. There are five rounds with cash prizes to be won.

This is a free spins round triggered by landing three of the moneyed Mr. Chips scatter symbols anywhere in view; the first thing to do is pick six of the nine game board squares to determine the number of free spins and multipliers. The other bonus can be triggered from here and more spins can be won by landing three more scatters.

Unsurprisingly Endemol know how to make a slot which captures the atmosphere of television shows very well and this Catch Phrase is another fine example. On a side note we think the original show was one word – Catchphrase – but this game splits it up so that’s why we’ve stuck with that option in this review.