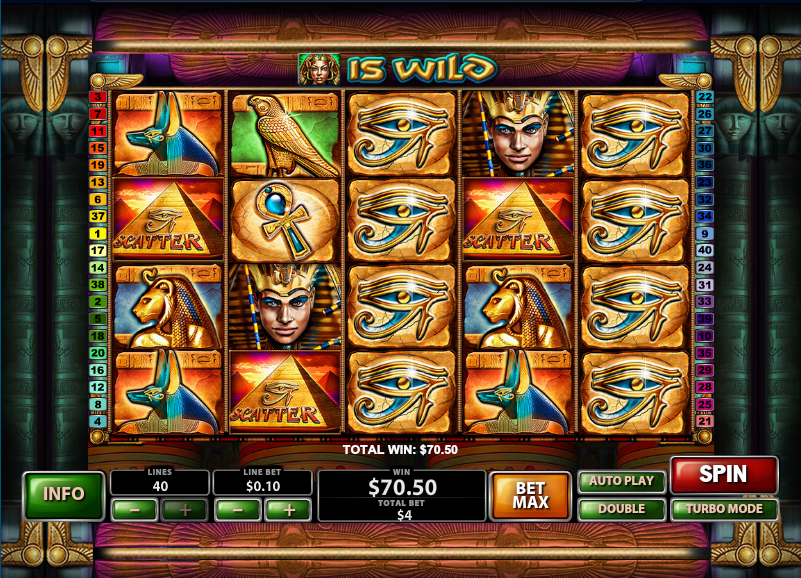 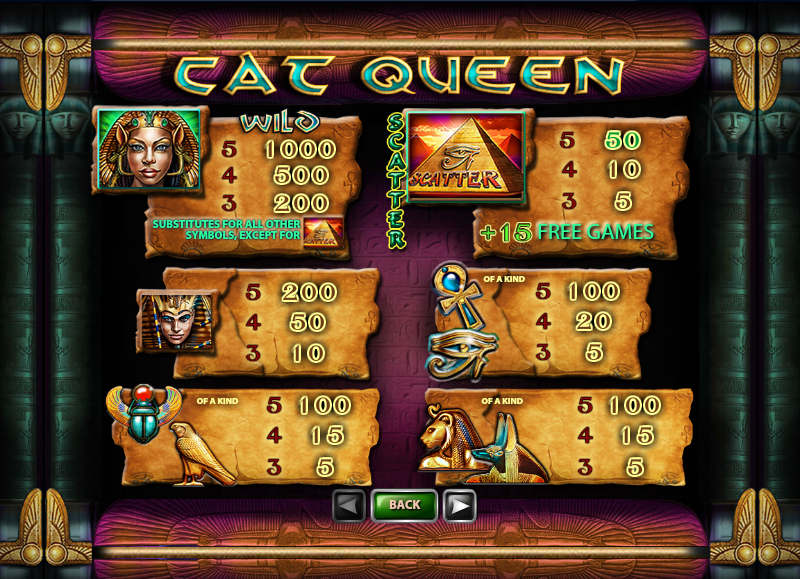 Close you eyes, chuck a virtual pebble inside a virtual casino and there’s a pretty good chance you will hit an Egyptian-themed online slot. We’ve reviewed plenty in the past and now we have a chance to check out one more – it’s called Cat Queen, it’s from Playtech and it certainly looks good. This genre’s competition is fierce though so read on to find out more.

Cat Queen plays out over five reels and forty paylines and, as is fairly standard with this theme, it all takes place against the backdrop of an Egyptian temple with ornate columns on either side of the reels.

The symbols on the reels are a range of Egyptian god logos including Seth, Bastet and Horus and then three symbols including The Eye of Horus, an Ankh and the Scarab. Lastly there’s a Pharaoh who pays 200x your line stake for five on a winning payline. The symbols can be stacked on the reels which means they can coverall positions on a single reel.

The Cat Queen herself is the wild who substitutes for all other symbols except the scatter; the scatter is a pyramid carved with the Eye of Horus.

There’s some good old free spins on offer here and to trigger them you will need to land three, four or five of the pyramid scatter symbols anywhere on the reels. As you can see from the video above, the reels change colour but the prizes remain the same.

There’s no multiplier of your winnings here but more spins can be won by landing three or more scatters.

After each win you can try and double your winnings by clicking the ‘Double’ button below the reels. Here you can play a game in which you try and pick a card which is higher than the dealer’s to double your winnings. There’s also an option to wager just 50% of your reel win for a 150% prize.

Use the Double feature with care – gambling every win on this feature is the fastest way to deplete your bankroll. Use it only occasionally and don’t go for too many correct guesses in a row.

Cat Queen certainly looks attractive but it doesn’t really add much to what’s already out there.The sound effects are quite dramatic though and if you’re a fan of this genre you will appreciate this game.