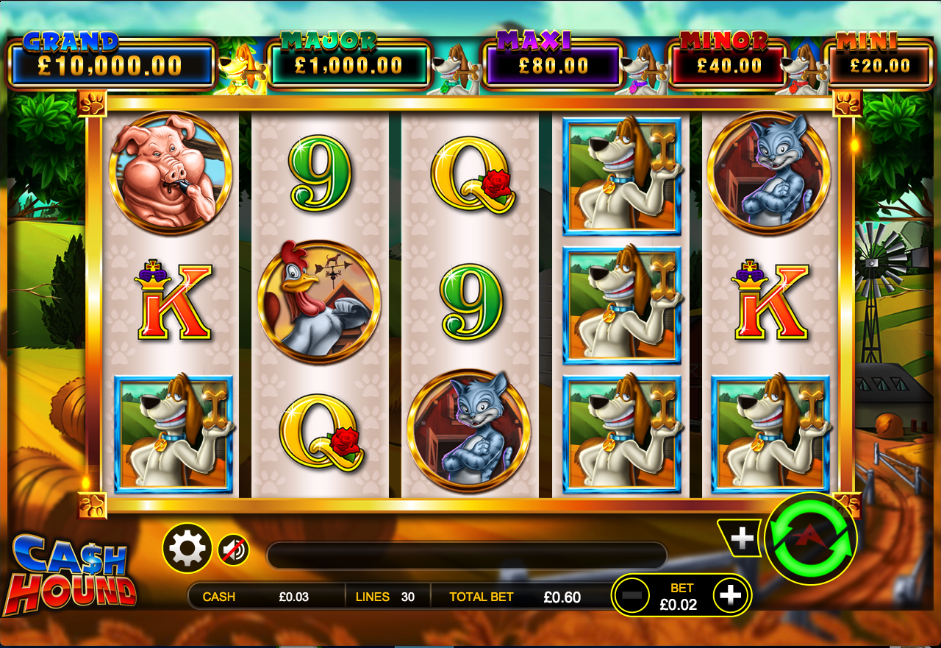 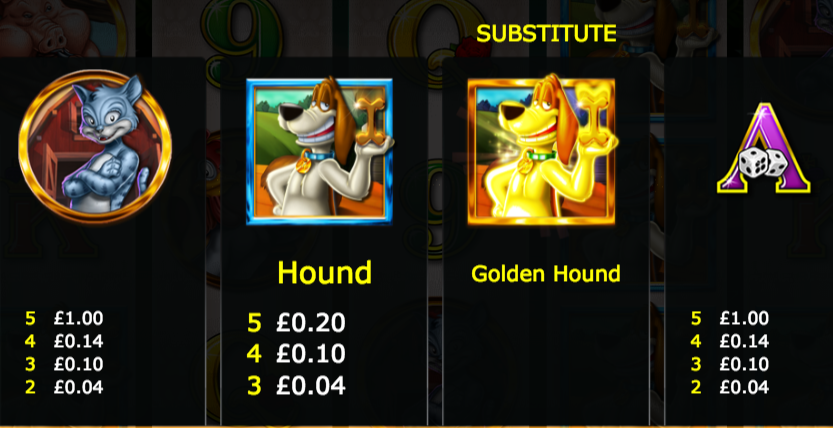 It’s time to take a trip down to the farm to visit a selection of cheerful animals who form the theme to this online slot machine; it’s called Cash Hound, it’s developed by Ainsworth Gaming and it comes with five jackpot prizes and some free spins.

Cash Hound is a five reel slot with three rows and thirty fixed paylines; gold-framed reels with paw prints stamped into the corners float against a backdrop of rural agriculture in rolling fields under a cloudy sky.

The high value symbols are all animals and include a cockerel, a rabbit, a pig, a cat and the hound;  9, 10, J, Q, K and A make up the lower values.

The golden hound is wild in the base game and it appears only on reel three and substitutes only for the hound; the gold bone is the scatter symbol.

Landing three or more gold bone scatter symbols anywhere in view will trigger either the Super Feature or the Crazy Feature.

Awards ten free spins on a set of reels which include a wild bone symbol and a hound head on reel one; whenever the hound head appears, all symbols on reels one, two or three may transform into the hound head and then into random matching ones. At the same time a multiplier of 2x or 3x will be displayed on the sixth reel on the right hand side and applied to any wins.

Awards six free spins with the hound acting as a wild; on the sixth spin the sixth reel will reveal 2x, 3x, 2x respin or 3x respin which means you’ll either receive a multiplier for your wins or a multiplier plus an extra spin.

As you proceed through the spins, hound heads are guaranteed to appear on more reels.

This is triggered by landing hounds in all positions on reels one and two; you’ll now receive a respin with those reels held in place, along with reel three if a golden hound is visible.

The five jackpot prizes above the reels are won in the following ways:

Cash Hound is a slot with some detailed, intricate graphics and a range of bonus features which should keep most people happy; you’ll receive lots of smaller wins due to the hound himself but some big wins in the bonus games. This game comes with an RTP of 94.04%.