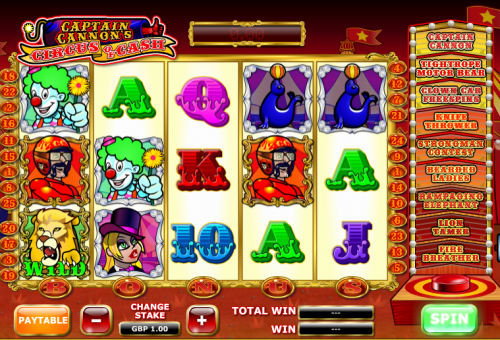 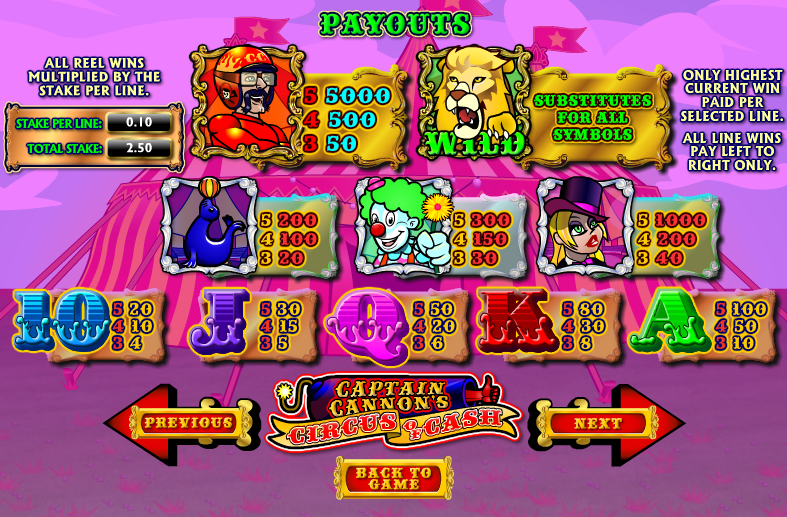 If you enjoy the thrill of a visit to the circus then Captain Cannon’s Circus Of Slots could be right up your street. There’s quite possibly a record breaking number of of bonus features in this game and each of them corresponds to traditional circus entertainment.

Playtech/Ash Gaming are the company behind this online slot and it’s a simple and bright offering that offers the player a wide variety of bonus options.  In keeping with the circus theme all the standard playing card symbols are decorated in a flamboyant, circusy way and the higher value symbols are the lion tamer, the clown, the performing seal and Captain Cannon himself.  The lion is the wild symbol.

This is where the fun starts and there’s an impressive nine bonus features waiting for the lucky player who lights up the bonus letters underneath each reel.  These light up randomly and seem to occur frequently.  When they do all light up, a hammer will hit the big red button on the contraption on the right hand side of the reels and pick a bonus game.  They are as follows with the first (Fire Breather) being the least lucrative and the last (Captain Cannon) worth the most:

It’s obviously the bonus games which make this slot so entertaining and it should keep you coming back for more circus-related fun.  There are five reels and twenty five fixed paylines so the minimum stake is £0.25 all the way up to £250.00.