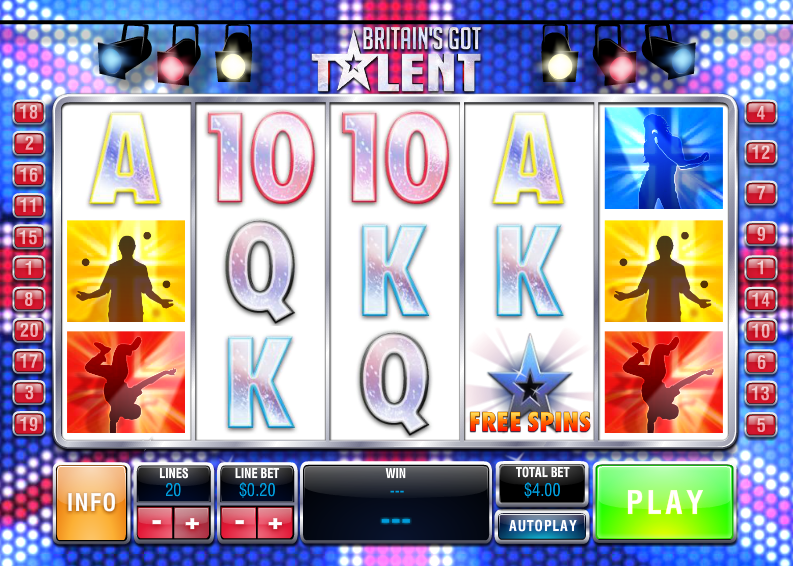 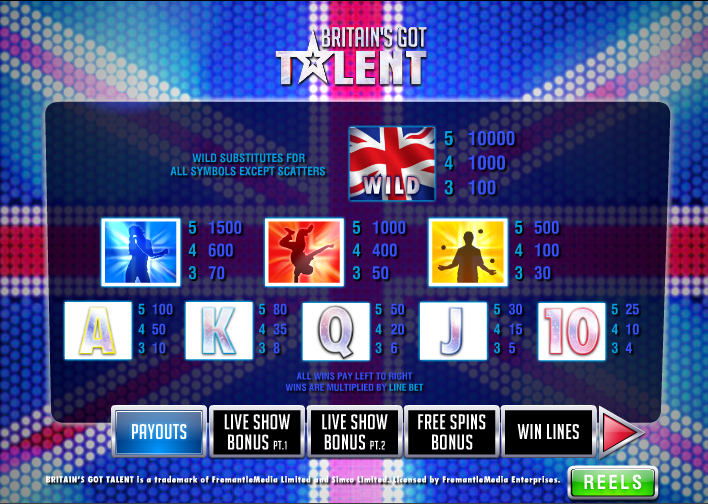 There’s a sort of inevitability about the Britain’s Got Talent online slot; the television show is so popular that someone was going to come up with this game sooner or later.  Playtech have taken on the challenge here and it’s a slot which contains two bonus features and looks and sound just like you’d expect.

Britain’s Got Talent is a five reel and twenty payline slot with a gigantic Union Flag in the background made up of coloured lights; the music is straight from the show and there’s a range of symbols which are coloured silhouettes of a singer, a dancer and a juggler.

The Britain’s Got Talent Bonus symbol and the Free Spins symbol will trigger the features while the wild is a flowing Union Flag.

Land three BGT symbols on reels 1, 3 and 5 to trigger this feature.

This is your chance to take an act all the way to the final but first you need to pick a musical act, a dance act or a novelty act to represent you.  The next stage is to spin wheel containing all eight acts in your category and whichever one it lands on is your act.

You now need to work your way through the Audition, the Semi-Finals and the Final and this is done by trying to gain applause from the crowd while stopping the judges from pressing their buzzers; this is all done automatically by the game.  If your act makes it to the end of their display before the judges all press their buzzers then you’re through to the next round with a multiplier win.

Winning the final awards the biggest multiplier win  of between 50x – 1000x.  When the game is over all the prizes from the rounds are totalled up.

This feature is activated by landing the Free Spins symbol on reels 2, 3 and 5; each winning symbol will show a number and these are totalled to give you the number of free spins (between 7 and 20).

Before the game begins, the BGT logo will zoom across the screen and drop some wilds into the reels; these will remain in place for the duration of the spins.

All the features are triggered by scatter symbols so you can play with tiny stakes if you like and still have the same chance of activating them.  Prizes will of course be less.

The BGT slot sticks nicely to the sights and sounds of the television show and fans of that programme will probably appreciate this slot, although it has enough to offer gamers in general. It’s a well made & high quality release and well worth checking out.