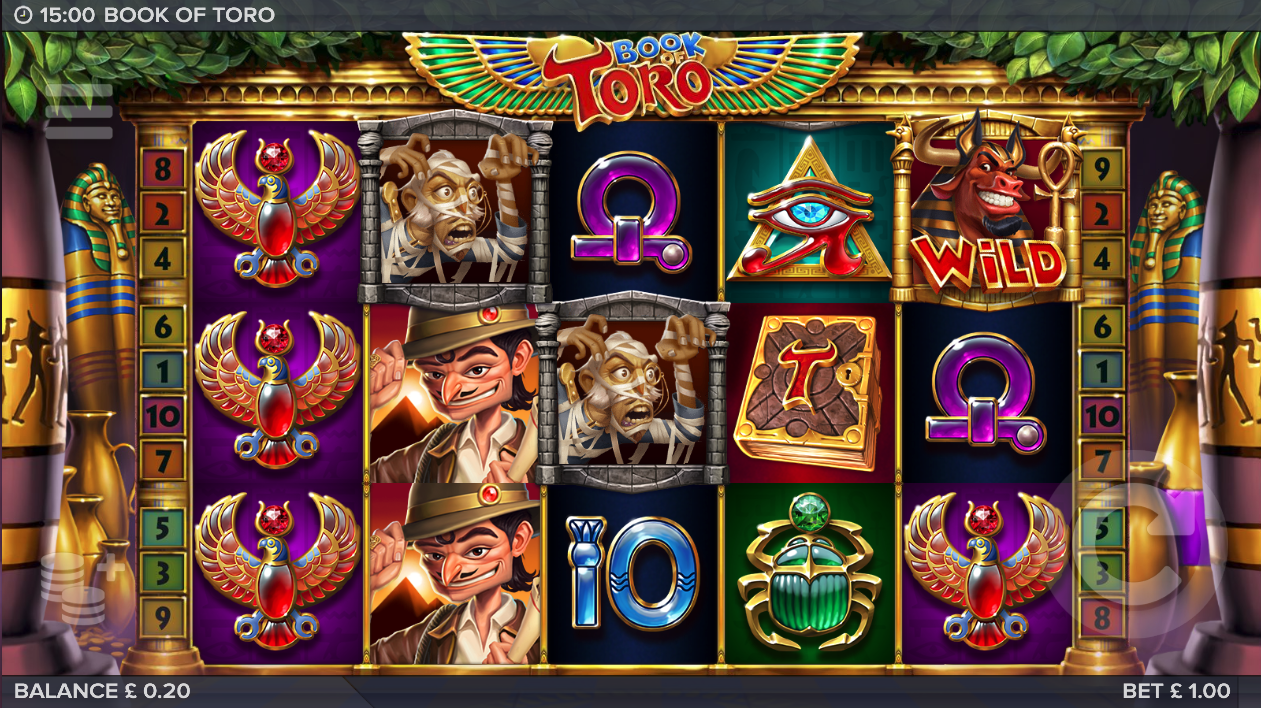 Many Egyptian-themed online slots come with the title of ‘Book of …..’ – Book of Duat, Book of Dead etc – but this game references a character who has appeared in other Elk Studios releases and so it’s called Book of Toro. Toro is the bull who’s previously appeared in Wild Toro and here he’s avoiding the marauding mummies while trying to find ancient treasure in the shape of Walking Wilds, free spins and Mummy Respins.

Book of Toro takes place in some tomb lined with golden sarcophagi and scattered with gold coins – there are five reels and ten paylines in play at all times.

The high value symbols include the suspicious-looking explorer, the Eye of Ra, the scarab beetle and the symbol for Ra; 10, J, Q, K and A make up the lower values. There are three wilds – regular, the Wild Book and the Walking Wild and the special symbol is the Mummy.

The Walking Wild symbol will only land on reel five and when it does it will move one reel left with each subsequent respin; any Wild Books will be locked in place until no more Walking wilds are on the reels, making it a bit easier to trigger the free spins.

This is triggered when at least two Mummy symbols land anywhere on the reels and they’ll all lock in place for one respin – more Mummies will also lock and award another spin.

If a Walking Wild appears on reel five the Toro Goes Wild feature starts up and the Walking Wild will move across the reels on each subsequent respin, moving up and across to knock the Mummies off and leave a trail of wilds in its wake.

Landing three, four or five of the Wild Book symbols anywhere in view will award 10, 15 or 20 free spins respectively; a regular symbol will be selected before the round starts and this will expand to fill the reel and pay out as a scatter when at least two (high value) or three (low value) symbols land. More spins can be retriggered by landing three more Wild Books during this features.