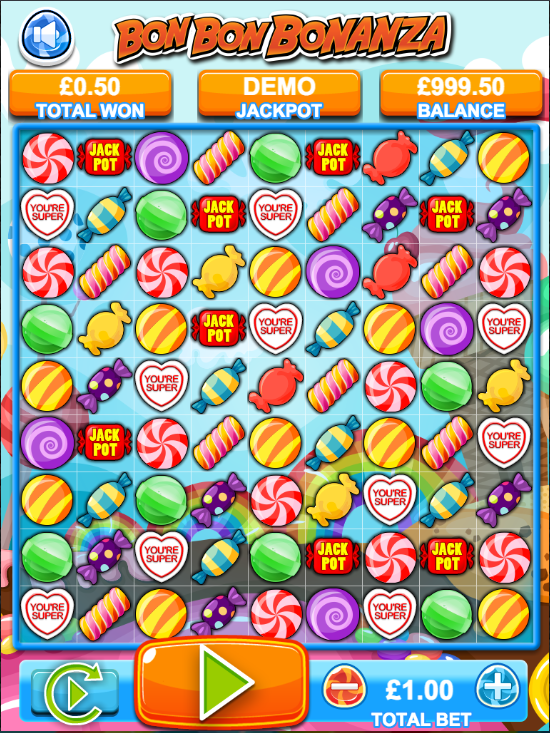 There’s nothing particularly original about an online slot machine themed on sweets and candy but this game from OpenBet does things a little differently; it’s called Bon Bon Bonanza and it has some interesting gameplay mechanics as well as several bonus features and a progressive jackpot.

Bon Bon Bonanza plays out on a 9 x 9 grid through which you can just about make out a candy covered landscape under a clear blue sky; the basic gameplay is reasonably familiar and as the symbols fall into the grid, any which make a vertical or horizontal match of three or more will disappear to make room for more to fall in and repeat the process.

There are twelve standard symbols and they’re all represented by various sweets with the pink and yellow twizzler and the green gobstopper both worth 10x the stake.

Forming matches of three or four symbols will create sticks of dynamite or bombs respectively with the following capabilities:

This is triggered by making a match of three You’re Super Love Hearts horizontally in the centre of the board; you must now arrange the symbol manually (or use Autoplay) to form wins and each win will gradually fill up the Mega Feature meter. When full, one of the following features is awarded:

Win the progressive jackpot total by matching three jackpot symbols horizontally in the centre of the board.

Bon Bon Bonanza is a little unusual but we found the gameplay quite addictive and good fun; you’ll win small amounts regularly and the dynamite and bombs are created frequently although it’s perhaps a little tricky to trigger the feature. This game comes with an RTP of 96.98%.