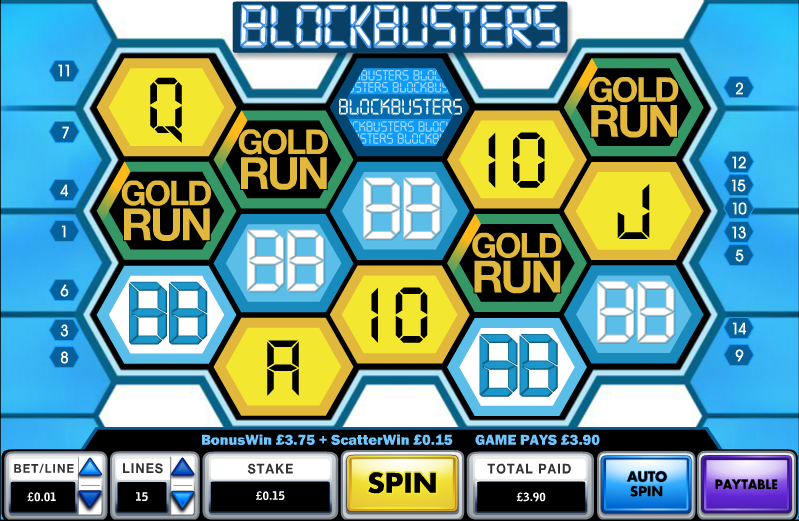 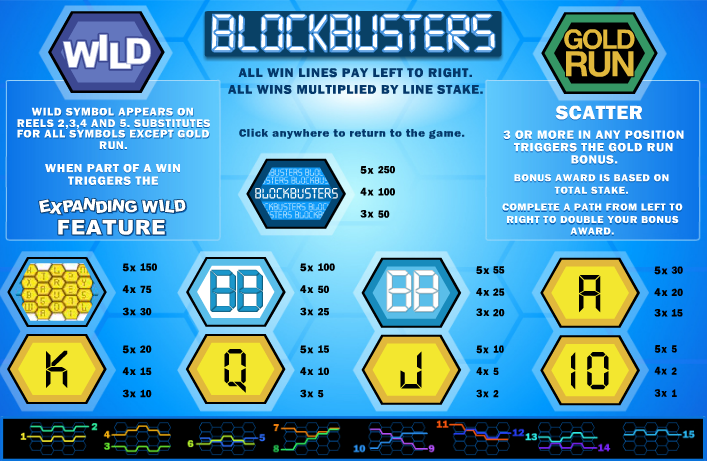 Fremantle Media do a nice line in the conversion of television shows to online slots; of course they are the shows that Fremantle themselves produce or have produced. Blockbusters is one such game and anyone who remembers the post-school quiz show fronted by Bob Holness will be delighted to have a pop at this slot.

Blockbusters is a five reel and fifteen payline game and of course the screen is laid out just as the board was on the original television show, although not quite as big. The hexagons, the blue and yellow colour scheme – it’s all very evocative of the 1980s.

10, J, Q, K and A are the low value symbols on the reels and then we have blue and white double Bs, a Blockbusters board symbol and the game’s logo.

There’s also a hexagonal blue wild symbol and then a Gold Run scatter which activates the feature.

The wild is well worth a mention here and if you can land one as part of a winning combination in the base game it will expand to cover the whole reel. The reels will then be evaluated with the new wilds in place.

The Gold Run was where the big prizes were won on the television show and it’s the same here; to trigger this feature you will need to land three or more of the Gold Run scatter symbols anywhere on the reels.

As you can see from the video below, your task is to make your way across the board, picking spaces to accrue money and trying to avoid the ‘Exit Bonus’ position. If you can find a path to the other side you will double your total prize.

When you make it to the Gold Run you don’t need to head straight across the screen, you can move to any adjacent square to collect cash. Of course you may still hit the ‘Exit Bonus’ space.

This looks and sounds just like the real thing and it’s certainly fun to play, however Fremantle have made more of the bonus features in games such as Family Fortunes so this one could perhaps have been better. Still, it’s worth checking out.