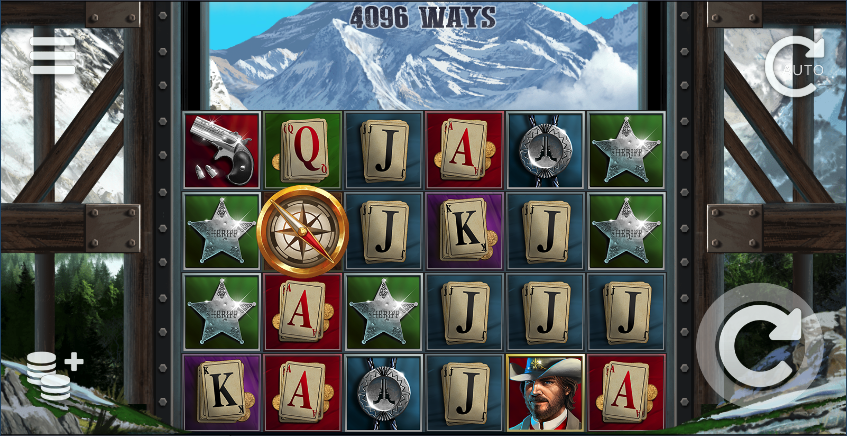 Mining for gold is the theme of this online slot from Elk Studios and the setting is a wild river in New York State in the 19th century; it’s called Black River Gold and it comes with a clever gameplay mechanic which offers several bonus features and plenty of free spins.

Black River Gold is a six reel slot with four rows initially and 4096 ways to win; those symbols form a dam as they drop into the reel set with lofty, snow-capped mountains forming the backdrop.

The higher value symbols include the local sheriff, a diamond, a gold nugget, a teardrop gem, a revolver, a tumbler of whisky, a sheriff’s badge and a tie pin; J, Q, K and A make up the lower values. The rose is wild and it will substitute for all others to help form winning combos except for the compass and the bonus safe.

Each symbol in a winning combo will disappear and be replaced by more falling in from above after which more matches can be made to continue the process; with each avalanche another row is added to the reel set to give the following number of paylines:

When there are no more wins the number of rows reverts to four again.

The compass is also a wild symbol but only if the symbols on either side of it (horizontally or vertically) match; it won’t disappear as part of a collapse and when it reaches the bottom of the reels it will turn into a normal wild symbol.

A revolver barrel can be created when a large, 2×2, 3×3 or 4×4 symbols drops onto the reels and absorbs standard symbols below it to ensure it lands flat horizontally; each symbol in one of the bullet chambers can then be used as part of a winning combo and when all have been used the revolver disappears.

Landing at three, four, five or six of the bank safe bonus symbols anywhere in view will award 10, 15, 20 or 25 free drops (or spins) respectively; there’s a Safety Level in play here which starts at four rows but climbs one for each spin/drop which results in a win – the next spin will then start at that level with the extra paylines.

Any wild symbol will not disappear in an avalanche but will drop to the bottom and stay there until they help out with a win; more spins can be retriggered in the same way they were to start with.

Black River Gold is exactly the sort of slot we like – it comes with the avalanche feature, free spins and lots of extra bonuses including the revolver which is one of the more innovative things we’ve seen recently. Don’t miss this one!