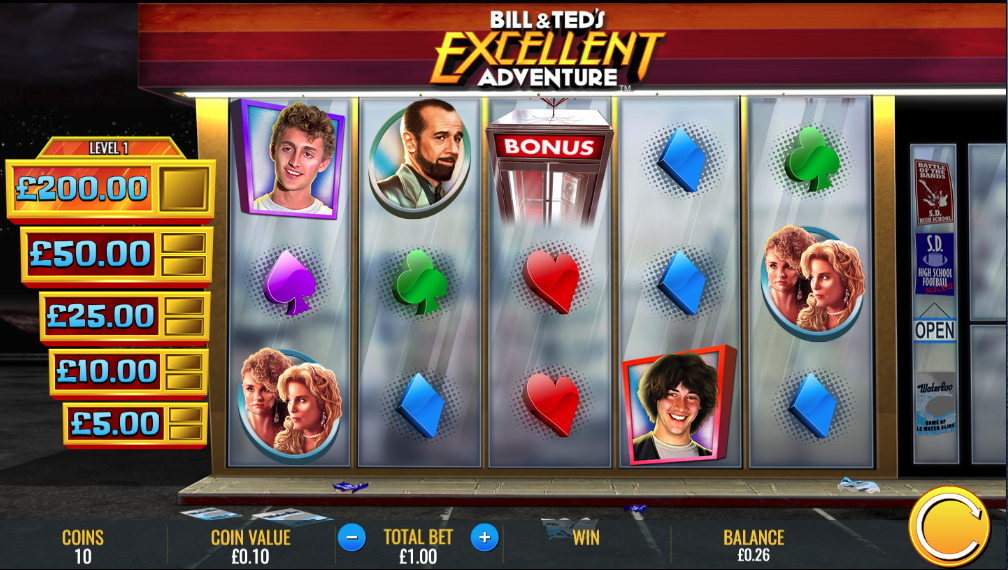 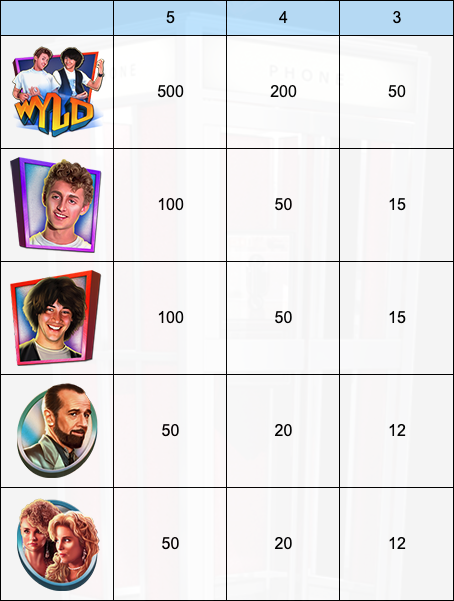 Bill & Ted’s Excellent Adventure is surely one of the 1980s most iconic movies and it features our student protagonists travelling through time to collect famous, historical figures to help them pass an exam; this online slot from IGT is not the first with this theme (click here for another) but it’s the latest one and full of bonus features.

Bill & Ted’s Excellent Adventure is a five reel slot with three rows and twenty fixed paylines; the setting is the grimey shop outside which Rufus first appears from the future.

High value symbols include Bill, Ted, Rufus and the girls while playing card symbols in blue, red, green and purple make up the lower values; the ‘Wyld’ symbol is wild and it will replace everything except the time machine phone box to create winning combos.

This may occur whenever at least one Bill and one Ted appear anywhere in view – all Bills and Teds will now turn wild and the payout will be calculated.

Trigger this by landing three of the phone box scatter symbols anywhere on reels one, three and five and you’ll get an initial three free spins; the reels will only feature that famous characters and phone boxes. Those characters are Beethoven, Billy The Kid, Albert Einstein, Genghis Khan, Joan Of Arc, Abraham Lincoln, Napoleon and Socrates.

Any phone booth landing will reset the number of spins to three and they’ll lock in place along with any famous characters – ending the round with two, four, six or eight characters in view will award 50x, 100, 250, or 500x the stake while each phone box will award a cash prize. If all positions are locked then the prize is 2000x the stake.

When the round starts one character is selected as the Jackpot Upgrade and if you can lock one on each reel it will upgrade the prizes by the starting amount – so the prize for two historical characters starts at 50x and then moves up to 100x, 150x and so on. Each prize can be upgraded a maximum of eight times.

If you can land the bonus phone box on reels one and three then reel five can respin to try and land a third to trigger the Lock & Respin feature.

This slot is another great tribute to a very entertaining film and we like the fact that all the features tie into events in the movie; Bill & Ted is a lot of fun and highly recommended.