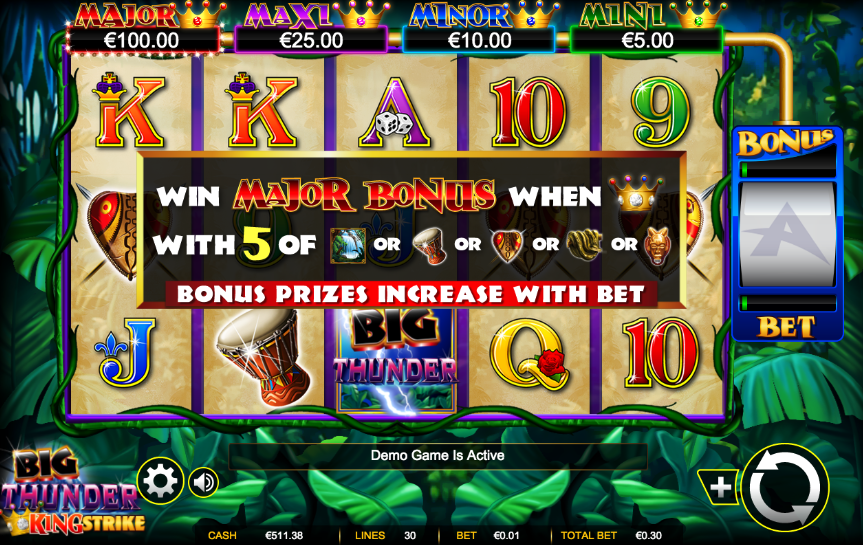 If you prefer your online slots experience to involve wild animals and jungle locations then this release from Ainsworth Gaming might fit the bill; it’s full title is Big Thunder King Strike and it comes with a free spins round and some jackpot prizes.

Big Thunder is a five reel slot with three rows and up to thirty paylines; entwined around those purple reels is a green vine which has somehow encroached upon the action from the gloomy jungle scene in the background.

The theme-related symbols include a large python, a native shield, a mask, a waterfall, a tribal drum and a crown (the King Strike); 9, 10, J, Q, K and A represent the lower values.

The giant gorilla is wild and he will substitute for all other symbols in the base game to help form winning combos except for the Big Thunder scatter icon.

The sixth reel comes in handy here because it will multiply each win by 3x or 5x depending on how it lands; in addition wins can pay from from right to left, left to right and don’t have to start from the end reels.

You will have noticed the jackpot prizes above the reels and these are won in the following ways:

Big Thunder is quite an intricate which looks as if it would work well as a physical machine and it certainly has lots to offer online as well including some traditional sounds, two bonus features and an RTP of 94.38%.