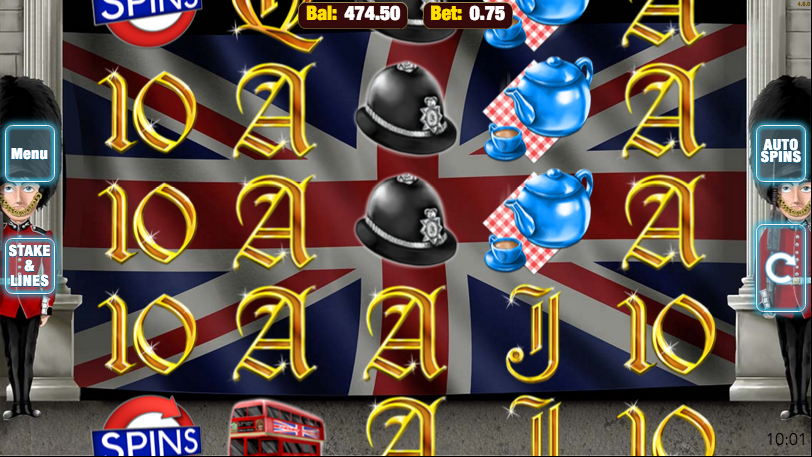 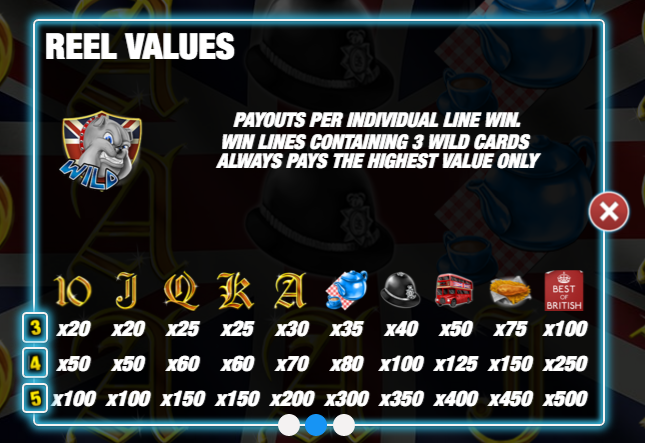 Best Of British is an online slot originally developed for mobile devices but which also looks at home on a desktop; it’s developed by Nektan and as you may guess from the title it’s a game themed on the idiosyncrasies of the British Isles, complete with all the symbols you might expect. Read on for all the essential information.

Best Of British is a five reel slot with three rows and up to fifteen paylines; if you leave the sound on you’ll be treated to the national anthem starting and stopping as you spin the reels and the backdrop is a gigantic Union Flag guarded on either side by some sullen-looking guards.

It’s probably fair to say that this game is more closely-associated with London than Britain in general and the choice of symbols bears this out; the high value ones include the ‘Best of British’ poster, fish and chips, a double-decker bus, a traditional policeman’s helmet and a teapot. 10, J, Q, K and A make up the lower values. All these symbols can appear stacked on the reels.

The British Bulldog is wild and it will substitute for all other symbols except the ‘Spins’ icon – designed in the manner of a London underground sign.

This is triggered by landing three or more of the ‘Spins’ scatter symbols anywhere in view; as you can see from the video above you will now receive a generous 30 free spins; it’s not so generous however if, like us, you manage to use 30 spins without a single win. Hey ho.

Best Of British is a slot which successfully makes the transition from mobile devices to desktop while keeping the same basic design; out of necessity it’s a little more basic than those designed primarily for the desktop but only just and we would recommend giving it a go – you’ll probably be luckier than us with the free spins. The RTP is 96.60%.