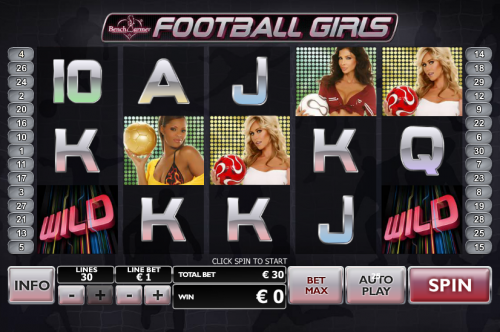 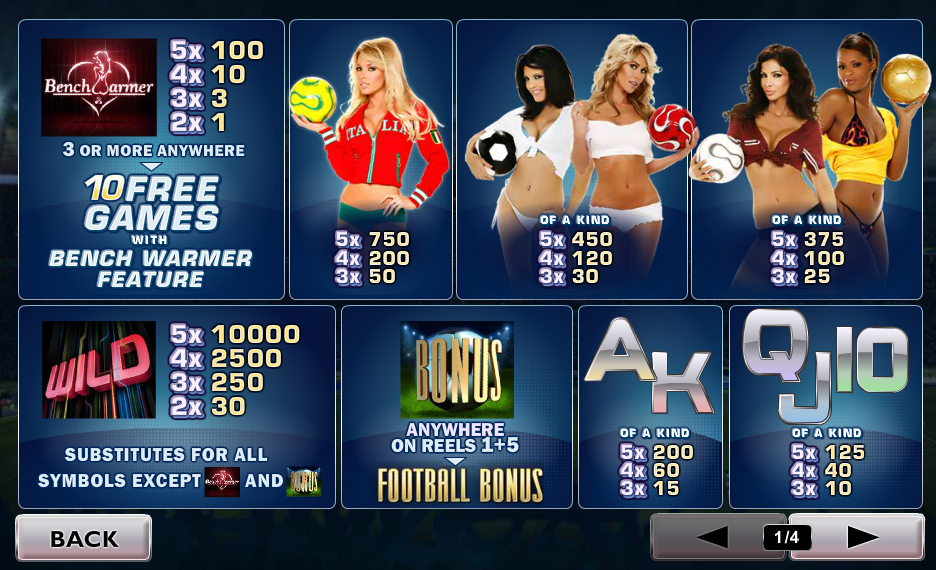 Benchwarmer Football Girls is a slot that, at first glance, looks as if it should appeal to the male half of the population; it’s football related and most of the special symbols are different girls in a variety of skimpy outfits. Of course not all football fans are male though and this is an entertaining slot however many X chromosomes you have.

Football Girls is a five reel, thirty payline slot with a slick interface which could be described as a little unexciting but that doesn’t detract from the gameplay.  10, J, Q, K and A are the low value symbols while the five girls (Benchwarmers) make up the higher value symbols with the blonde Italian having the highest worth.

There’s also a wild symbol named ‘wild’, a Bonus symbol on reels one and five and a Benchwarmer logo which is the scatter symbol.

If you can land the Bonus symbols on reels one and five you’ll be whisked off to a screen which presents you with the five different footballs carried by the various girls.  All you need to do is pick three and there’s a cash value associated with each one.

This is the best one and you can win it by landing three Benchwarmer symbols anywhere on the reels.  You essentially win ten free spins but first you get to pick the Benchwarmer of your choice who will expand to cover the whole first reel.

She stays there for the duration of your free spins and more of her symbols are added to the reels.  Spin three more Benchwarmer symbols and you’ll get ten more free spins, something you can win indefinitely.

Football girls is a very easy to play slot machine  with some ‘attractive’ graphics and two fun bonus features.  The Football Bonus is easier to win than the Benchwarmer Feature but they’ll both come around eventually.

Minimum bet per line is €0.20 so it’s not the cheapest game; high rollers can splurge an amazing €15,000 per spin with everything maxed out so make sure you know your limits.