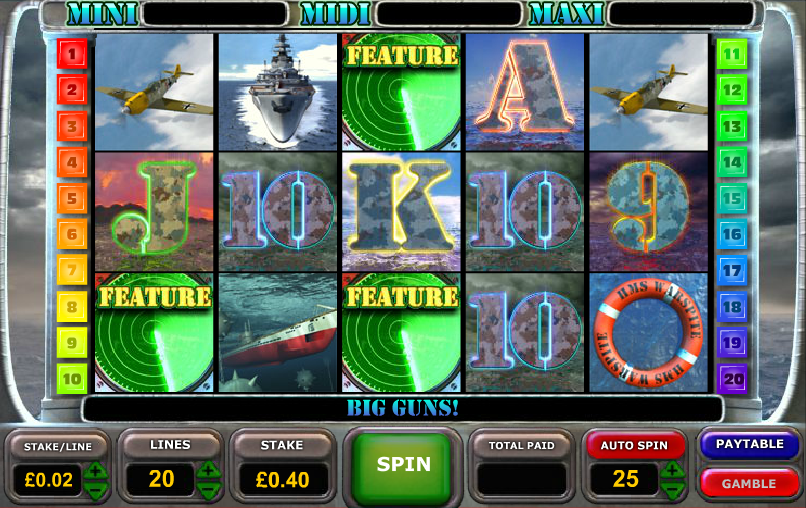 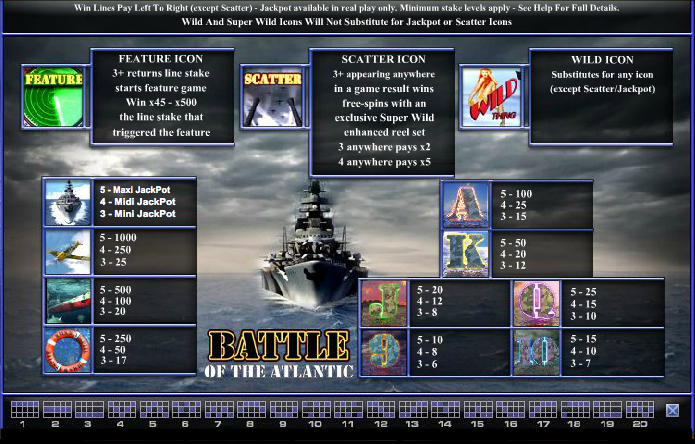 The Second World War provides the setting for this action packed online slot from Openbet; it’s called Battle Of The Atlantic and it’s theme is the aerial and naval battles which took place in this arena with the aim of military superiority and the protection of the Atlantic convoys which sailed between North America and Europe.

Battle Of The Atlantic is a five reel and twenty payline slot and the backdrop to those reels is a grey and gloomy Atlantic setting. The colourful symbols take up most of the screen space and while the lower value ones are the standard 9, 10, J, Q, K and A, the higher values are all theme-related. They include a sunken ship, a fighter plane, a life buoy and a warship.

The wild symbol is a painted girl, the scatter symbol is an anti-aircraft gun and the bonus symbol is a green radar screen.

If you can land three or more of those scatter symbols then you will trigger this free spins round. First you will be presented with 15 boxes and you must pick them one by one, revealing various spin numbers. These will be totalled and when you find the ‘Start Free Spins’ box, the spins will begin.

During the spins, ‘super wilds’ are used and each time one lands it will display a number; it will then remain frozen in place for that number of spins.

Free spins can be re-triggered from within this bonus.

If you can land there or more of the radar screen bonus symbol on an active payline you will trigger this mini-game. It’s a version of the game ‘Battleships’ and your plane is trying to destroy the ship in the waters below.

You will be presented with a game board and your task is to click the squares one by one to try and find ships. Each square is a bit of a ship and when you uncover a complete one it will be sunk. The more ships you sink, the more you win but revealing a gun turret will end the bonus.

The three jackpots available here are the Mini, Midi and Maxi and you can see the current totals above the reels. These amounts are won by landing three, four or five of the warship symbols on an active payline. You must be wagering £0.25 per line to be eligible for these prizes.

After each win you can gamble that amount by clicking the ‘Gamble’ button below the reels. Here you can try and double or quadruple that among by correctly guessing the correct colour or suit of the next card to be drawn.

Play with as many lines as possible – you will have more chance of triggering both the main feature and the progressive jackpot. Don’t forget to bet £0.25 per line if you want to have a chance of winning the jackpots.

There’s lots going on here and the sound effects are quite entertaining but it seems very hard to trigger any of the features. Perhaps we were just unlucky but we’d like to have a bit more bonus action.