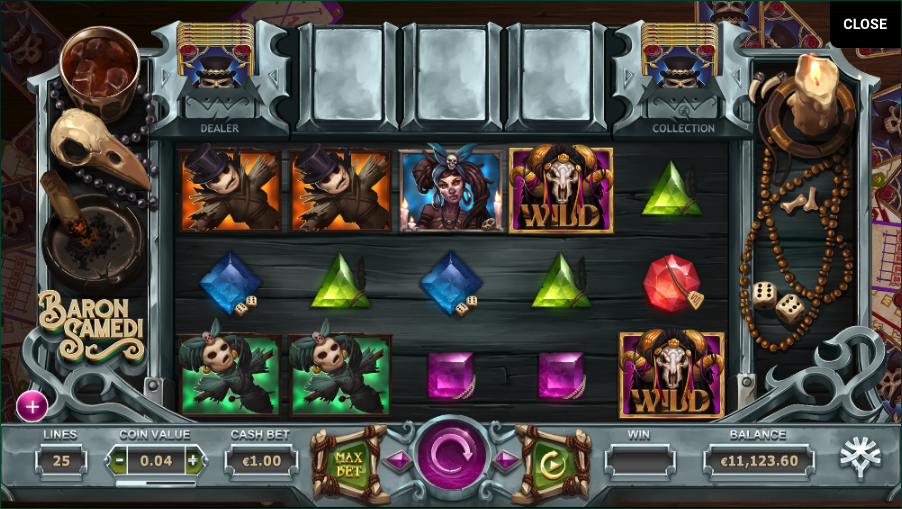 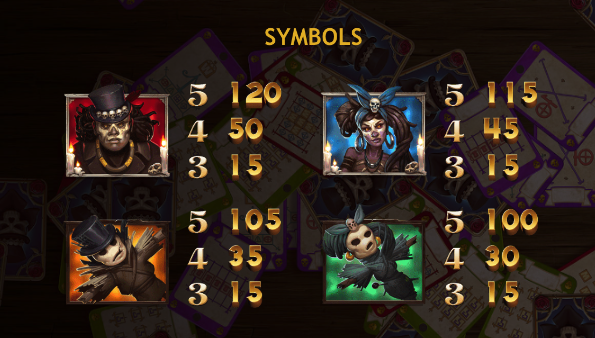 Voodoo-themed online slots don’t come around very often so we’re pleased to present to you Baron Samedi, developed by Yggdrasil Gaming and based on this skeletal character associated with death, rum and smoking cigars – keep reading to find out more.

Baron Samedi is a five reel slot with three rows and twenty five fixed paylines; those reels spin on a wood and metal tray accessorised with bones, alcohol, cigars, candles and dice; the row above the reels contains cards which we’ll explain shortly but they become important during the main feature.

The high value symbols include the Baron, his wife Maman Brigitte and two voodoo dolls; gems of red, green, blue and purple make up the lower values.

The animal skull is wild and it will substitute for all others to help make winning matches except for the skull bonus symbol.

The little stack of cards above the reels on the right is your collection of cards and these are earned during the Voodoo Respins and Free Spins rounds; there are four levels of cards and they all award variations of the following:

You’ll being the game with a selection of cards to get you started and completing collections of cards will award extra spins in the main feature.

This is triggered by landing two of the skull bonus symbols anywhere in view for which you’ll receive one free respin; you will be dealt three cards from the top left pack and the features on those cards will apply to this spin. The cards are then added to your collection.

Trigger this by landing three, four or five of the skulls anywhere in view for which you’ll receive 7, 12 or 15 free spins respectively; on each spin you’ll get three more cards and their associated features which are then added to your collection.

If a card collection is completed then three extra spins are awarded with that card locked in the first card position above the reels.

Baron Samedi is a slot with a clever bonus feature we’ve not seen before; it ties in well to the subject matter and it extends the free spins round in an imaginative way; the graphics and sound effects are top notch and there’s a nice, high RTP of 97.00%.