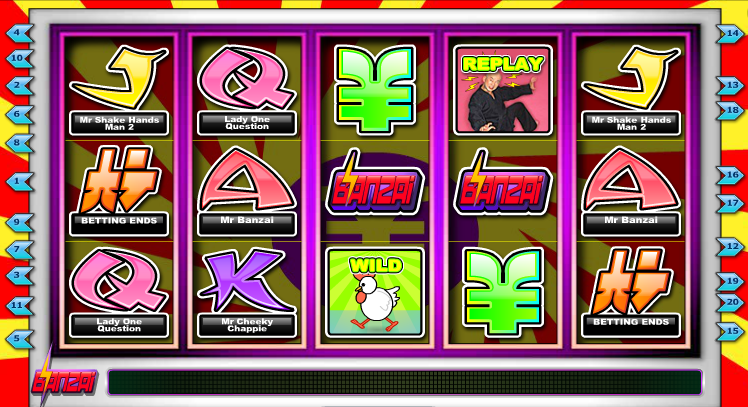 Anyone who remembers the classic television show Banzai from the early 2000s will be absolutely delighted to learn that Electracade have released an online slot dedicated entirely to that strange blend of Japanese kookiness, amusing characters and opportunities to bet for fun from your sofa.

Aficionados will remember Lady One Question, who asked celebrities one question and then stared silently at them and Mr. Shake Hands Man who shook celebrities’ hands for as long as possible.  In these cases the viewer would be betting on how long it would take before the celebrity in question gave up.  It was brilliant late-evening television and much appreciated during it’s three series.

So this slot is based on that show and it’s a five reel and twenty payline game with all the Japanese style and funny characters you could want.  The main symbols are various Japanese symbols and Banzai-related graphics while the minor ones are J, Q, K and A adorned with the names of the show’s characters.

The special symbols are a chicken wild, a bonus symbol featuring the characters and a replay symbol containing the show’s main man.

This is the minor bonus feature in Banzai but it crops up quite regularly; if you can land three or more of the replay scatter symbols anywhere on the reels not only will you get the appropriate scatter prize, you’ll also get a free spin!

This is where the entertainment is and to grab this reward you need to land three or more of the bonus symbols on an active payline.

You will now get the chance to pick from four on-screen icons each containing a game as follows:

This is a great slot based on a much-missed television show; all the ingredients are here to make for a fun slots experience – two bonus games in particular and we’d recommend Banzai to any slots fan.