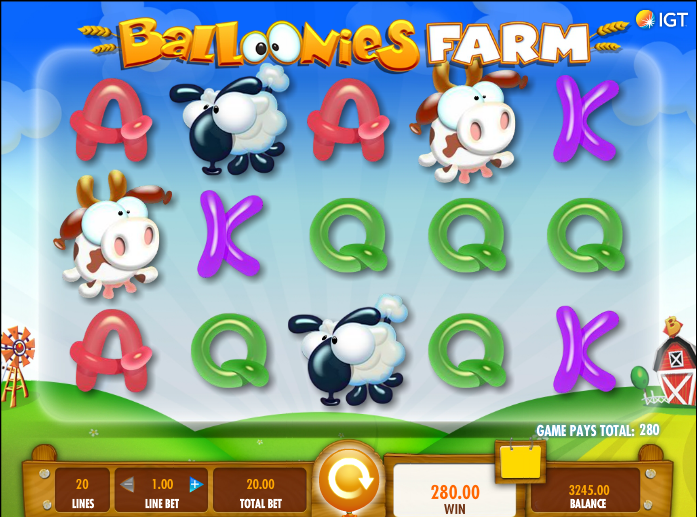 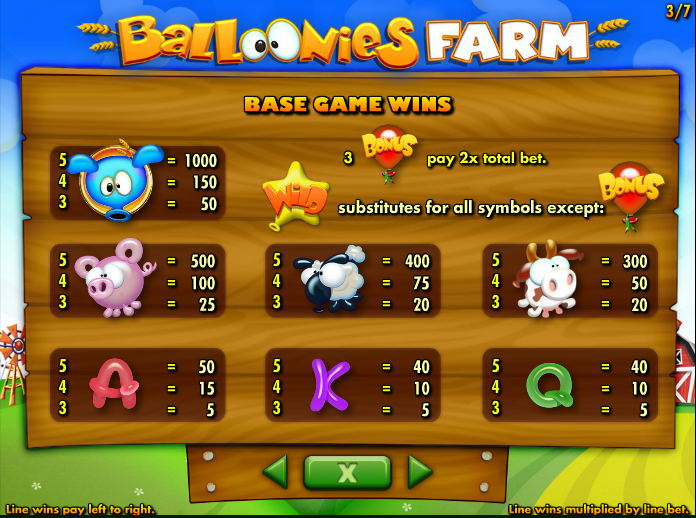 Online slots players who remember a game called Balloonies will surely be pleased to hear that there’s now a sequel in the form of Balloonies Farm; it’s developed by IGT and it’s themed around a new group of inflatable farm animals – read all about it below.

Balloonies Farm is a five reel slot with three rows and twenty fixed paylines; the symbols float upwards in this game and each time a winning combo is formed, those balloons will disappear to be replaced by more floating up from below. More winning combos can then be formed.

Behind those transparent reels is an agricultural setting with a traditional red barn and windmill accessorising the landscape.

The higher value symbols include the blue Balloonies character and three inflatable animals – a pig, a sheep and a cow; Q, K and A formed from balloons are the lower value symbols.

The wild symbol is a yellow balloon star which will replace all others to form winning combinations except for the red balloon bonus icon. The wild will also award a random multiplier of up to 5x for any wins in the base game.

This is triggered by landing three of the red balloon bonus symbols anywhere on reels two, three and four; you will now get to select one of four free spins options as follows:

The wild acts in the same way as in the base game but will instead award greater multipliers depending on the option chosen. It’s not possible to trigger any more spins from within this round.

Balloonnies Farm is actually quite similar to Balloonies but there are enough differences in the features and the setting to make it well worth checking out – the RTP ranges between 92.90% – 96.40%.