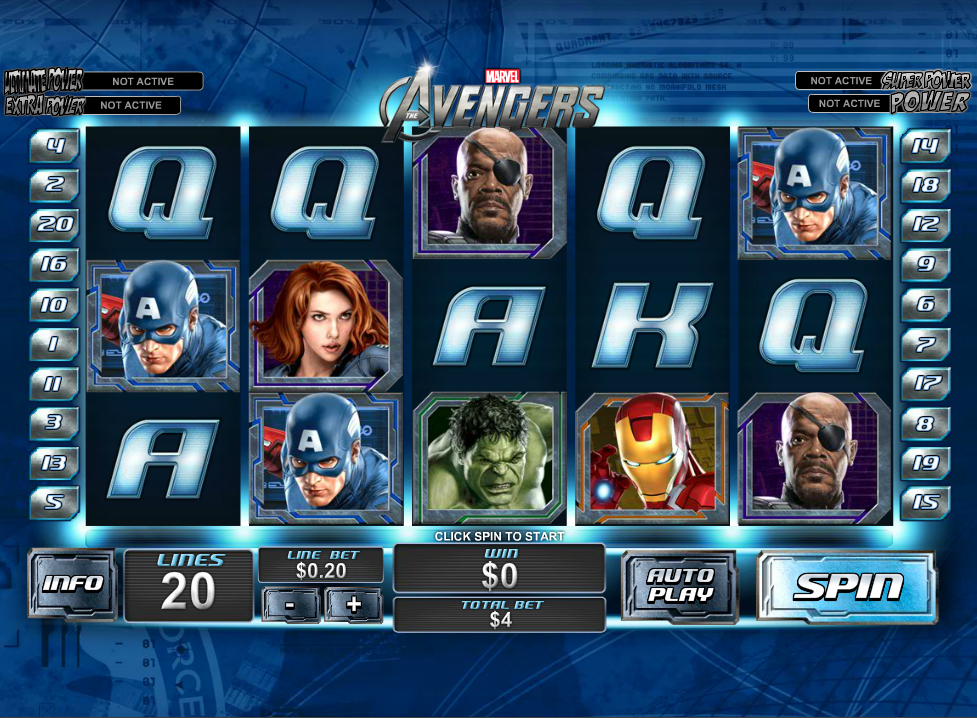 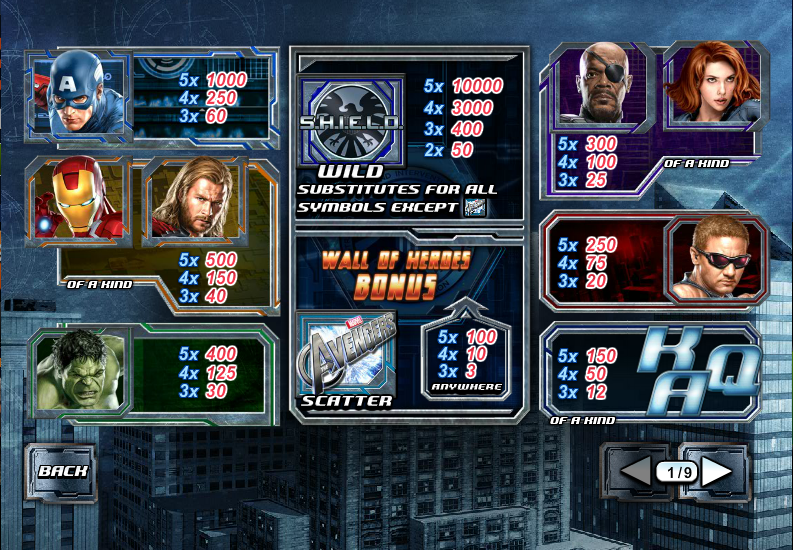 Avengers Assemble was arguably one of the best superhero movies of recent times; perhaps equalling the Watchmen in quality and entertainment.  It was a massive box office hit which brought together a number of Marvel’s superheroes who have to work together against a common cause under the watchful eye of Nick Fury.

Avengers is one of Playtech’s Marvel slots and it’s a glossy, five reel and twenty fixed payline game which adheres to Playtech’s successful formula for this series of machines.  The low value symbols are the Q, K and A and then, in increasing value, we have Hawkeye, Black Widow, Nick Fury, Hulk, Thor, Iron Man and Captain America.  The wild symbol is Nick Fury’s S.H.I.E.L.D. logo while the scatter is the Marvel Avengers logo.

There’s plenty of variety in the bonus games and we’ve listed them below:

If you can land Captain America, Iron Man, Thor, Hulk and Nick Fury on consecutive reels on an active payline you’ll win 200x the line bet.

This is the main bonus game and you can trigger it by landing three of the scatter symbols anywhere on the reels.  You’ll be transported to a screen with a 5 x 4 grid of Avengers logos and you need to click and pick three matching superheroes.  Click on Loki the baddie and the game is over.  When you’ve found three of a kind you’ll win 9 free spins and each of the four heroes have their own in-game advantages as follows:

When the spins have finished you return to the Wall of Heroes for another shot at some more free spins.

Everyone playing Playtech‘s Marvel slots are in with a random chance of triggering one of the following progressive jackpots – Power, Extra Power, Super Power and Ultimate Power – but the higher your stakes, the better chance you have.

Avengers is an extremely polished and entertaining game and it’s noticeable that the characters on the symbols look exactly like the actors involved.  The paylines are fixed so there’s a minimum stake of £0.20 and a maximum of £500.  If you’re feeling lazy there’s an Autoplay feature which won’t stop until you trigger a feature.