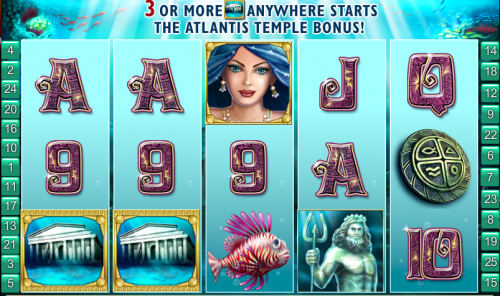 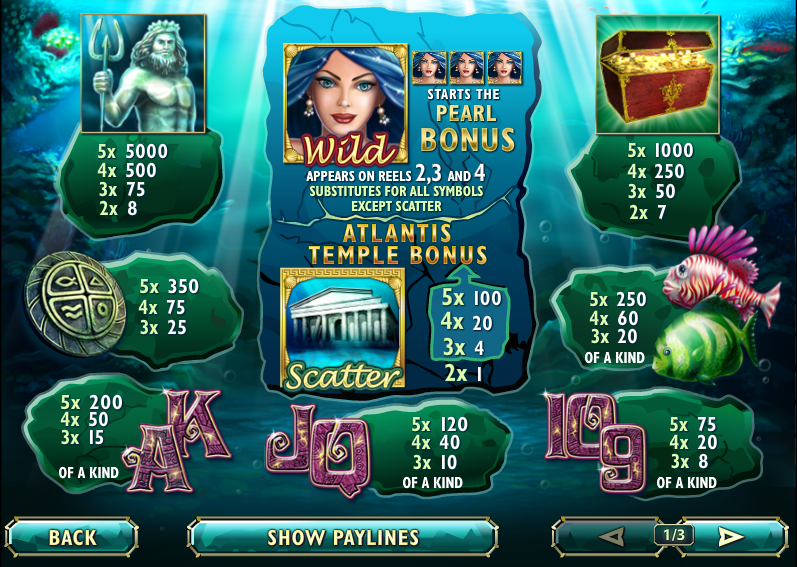 The legendary lost city of Atlantis may or may not have some basis in reality but it’s a story which dates back the time of the ancient Greeks; Plato first wrote about it 360BC and almost certainly concocted the tale himself but that hasn’t stopped generations of enthusiasts from researching the myth as if it really existed.

Still, Atlantis is a good theme on which to base on online slot and that’s just Playtech have done here; Atlantis Queen is a five reel and twenty five payline game set amongst the ruins of that famous sunken city.  While basic playing cards represent the low value symbols, the higher values are a selection of theme-related symbols so we have red and green tropical fish, a shield with symbols, a treasure chest and statue of Poseidon, the Greek god of the sea.

The Queen herself is the wild symbol and also triggers one of the bonus games while the ruins of a temple is the scatter symbol.

This mini-game is triggered by landing three of the Queen symbols on reels two, three and four; you will now be whisked to a screen displaying nine randomly picked oysters.  Each oyster contains either a bronze, silver or gold pearl and you will receive the total worth of all these pearls.

This is the free spins round but there’s a bit more to it than that; you can trigger this feature by landing three of the ruined temple symbols in standard game play.  As you can see from the video below you will then get to play a mini-game which provides you with the number of spins, a multiplier, an extra scatter and an extra wild if you get that far.

You pick starting from the bottom then the game will tell you what do next – it could be to collect all prizes in that column, pick another prize in the same row, move up one row or collect what you have so far.  The free spins round will then begin!

This is a really nice game from Playtech with some lovely graphics and an appropriately aquatic soundtrack.  The variety of bonus features add an extra dimension and it’s no surprise that this is a constantly popular online slot.