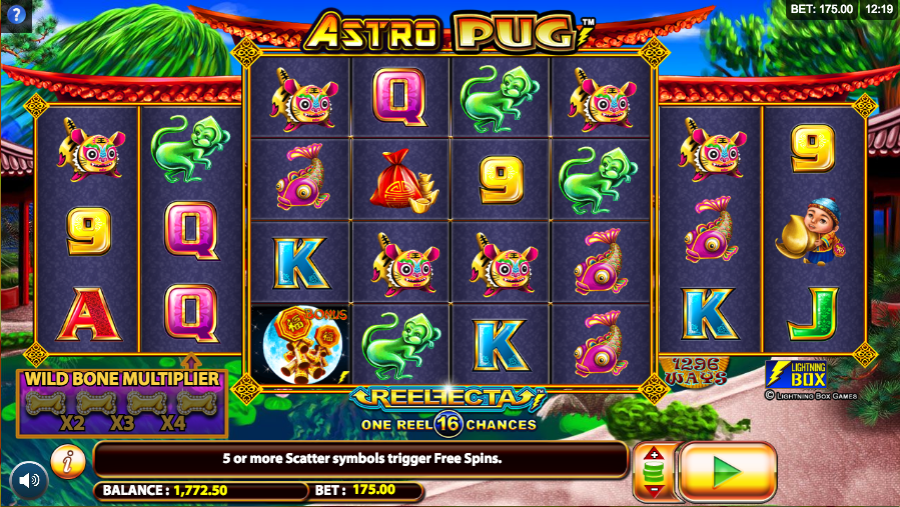 Online slots with a touch of the oriental come around regularly but of course some are better than others; here we have Astro Pug from Lightning Box, a game with a similar template to Astro Cat from the same company and an unusual central reel around which the gameplay revolves.

Astro Pug is a five reel slot with three rows and 1296 ways to win which means there’s no payline structure – wins are formed as long as there are matching symbols in adjacent rows starting from the left hand side. The sixteen positions in the centre are obviously the talking point here and they are called the Reelfecta, any of those symbols can be used in a payline but only once per spin.

The high value symbols include the small child, a jade monkey, the pink koi, the big of gold and the golden lion; 9, J, Q, K and A represent the lower values.

The pug is wild, he appears only on reels two, three and four in the base game and he will replace all others to help form winning combos except for the scatter symbol. There’s also the bone multiplier which only appears on reel two and has a multiplier which we’ll explain below.

The bone multiplier on reel two will apply a multiplier of 2x, 3x or 4x to any win to which it contributes – the current value will be shown in the bottom left of the screen.

This is triggered by landing at least five of the scatter symbols on the outer ring of the Reelfecta reel; there’s an unlimited number of spins and on each one an outer position (starting from the top left) will show either a pug or a bomb. A pug will award an extra spin while a bomb will end the round (although you’ll always get three free spins to start).

The pug remains wild during this around and filling all outer positions with it will a Mega Spin in which all Reelfecta positions become wild for a big payout (hopefully).

Once you’ve got to grips with the gameplay in Astro Pug and you’ve worked out what’s going on it’s an enjoyable slot with some inventive gameplay and features; the big bucks seem to be in the free spins although the bone multiplier helps out too. This game comes with an RTP of 95.73%.