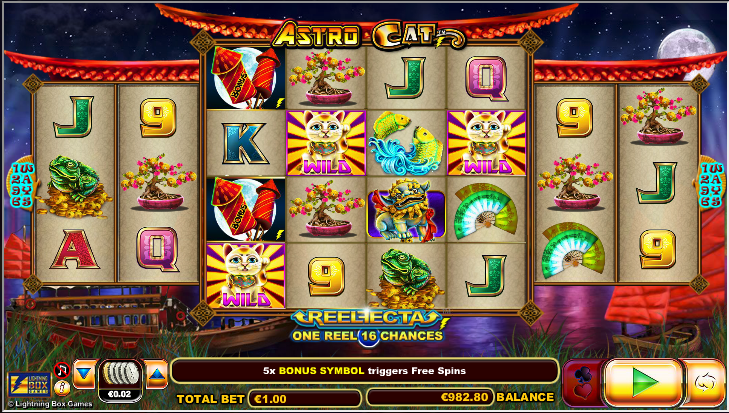 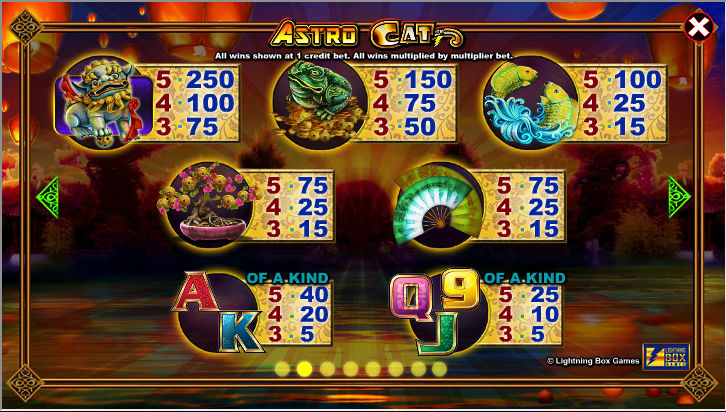 It’s time to take another virtual trip to the mysterious Orient as we check out this unusual online slot from Lightning Box Games; anyone who has played Pixie Gold or Druidess Gold will recognise the odd reel structure but for those unfamiliar with those games we’ll explain how it all works in this review.

Astro Cat is a essentially a five reel slot with three rows and 1296 ways to win; there are so many paylines because of the giant third reel (the Reelfecta – the 4×4 grid in the centre) but more of that below. The reels spin beneath the roof of a temple while small Chinese boats float on the calm waters behind.

There are five theme-related symbols including a stylised dragon, a frog, a pair of Koi carp, a bonsai tree and a pair of fans; 9, 10, J, Q, K and A make up the lower values.

The Maneki Neko Astro Cat is the wild symbol, it appears only on reels three and four and will substitute for all others except the scatter – that’s a pair of fireworks.

Let’s start with that giant 4 x 4 square in the centre; this is reel three and called the Reelfecta. During the base game it allows you to form winning combos with any of those 16 symbols but each can be used only once. It’s a little confusing trying to spot winning lines as they come up but it gets clearer the longer you play.

This is triggered by landing at least five of the firework scatter symbols anywhere in view; you will now receive a maximum of 12 free spins with locked wilds.

On each spin a Reelfecta position (starting in the top left corner and moving clockwise)  will become a wild symbol or a poison icon; each wild will lock in place for the duration of the spins but a poison icon will end the round.

If you are lucky enough to turn all outer edges of the Reelfecta reel wild you’ll receive a mega spin in which the whole Reelfecta will become wild. Landing three more firework scatters will award five extra spins.

Each win can be gambled by clicking the hearts/clubs button below the reels; try and double or quadruple that amount by guessing the colour or suit of the next card drawn.

These Reelfecta games are quite clever when you eventually understand what’s going on and we like Astro Cat and it’s small touches (like the way the boats in the background start bobbing when you land a win). It comes with an RTP of 95.44%.