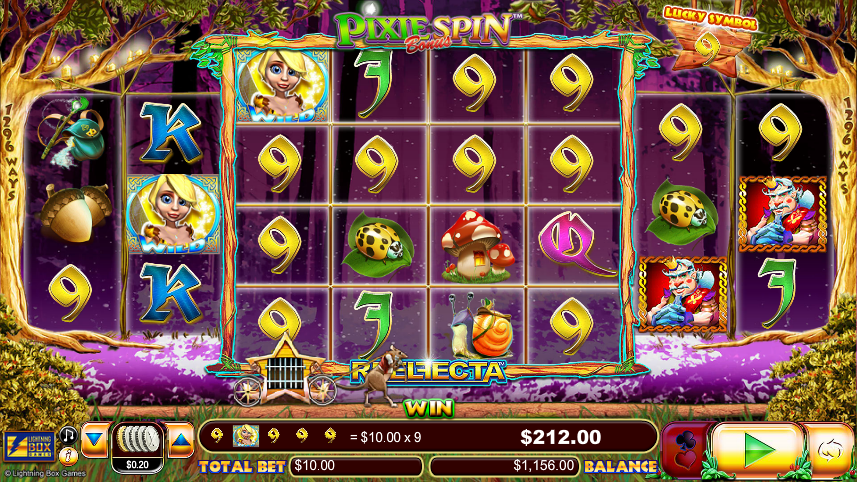 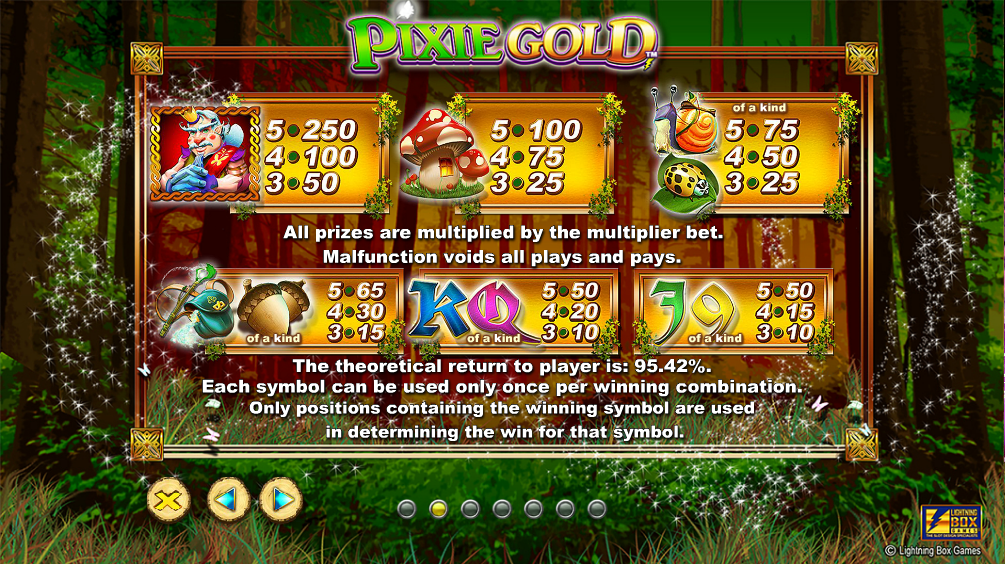 If you’ve played a game from Lightning Box called Druidess Gold then you should have a rough idea of what to expect from a game called Pixie Gold from the same developer. These are online slots set in a fairytale, forest fantasy land inhabited by mystical little creatures. Perhaps the main draw though is the giant Reelfecta reel and if you don’t already know how it works you should read on to find out.

Pixie Gold is a five reel slot with three rows and 1296 ways to win; it’s that giant third reel which mean there are so many paylines and we’ll explain a bit more about it below. It’s all set deep in some woodland environment where no daylight penetrates the canopy.

There are six high value symbols including the king, the mushroom house, a snail, a ladybird, a little green pouch and a pair of acorns; 9, J, Q and K make up the lower values.

The little blonde pixie is wild, appears only on reel three during the base game and will substitute for all other symbols except the gold ‘K’ star; that star helps to activate the main feature.

First we’ll explain how that giant centre reel works – it’s called the Reelfecta and it can form part of winning combos with the other reels but only using one of the 16 symbols on show. It’s a fast-moving game and this can be a little hard to grasp but that’s what’s happening.

As you’re playing the game you will notice the carriage moving along underneath the reels; if this vehicle lines up directly underneath the golden star you will trigger this feature.

You will now receive just one free spin but there’ll be a pixie wild on reels two and three which almost guarantees a decent win. The feature triggers regularly also so you don’t need to wait long for it to happen again.

Any win can be gambled by clicking the hearts/clubs button below the reels; now try and double or quadruple that amount by guessing the colour or suit of the next card drawn. There’s a limit of five successive.

The good news is that Pixie Gold is not a direct copy of Druidess Gold and the similarity ends with the Reelfecta reel; it’s good fun, cute and the bonus features should keep things interesting. There’s an RTP of 95.00%.