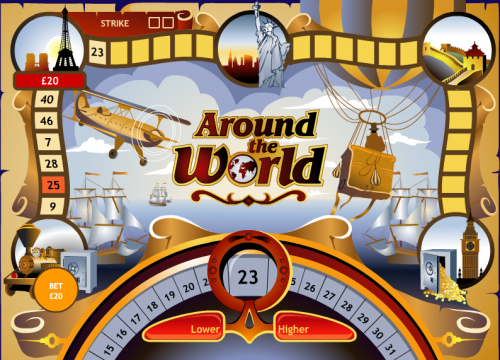 It’s always nice to play a game based on one of the classics of 19th century literature; Around The World is of course a homage to the 1873 Jules Verne novel, Around The World In Eighty Days.  Phileas Fogg is the main character who accepts a £20,000 bet to traverse the globe within 80 days, starting from The Reform Club in London.

Around The World is not an online slot but one of Playtech’s range of supremely playable arcade games and it’s available at our recommended casinos.  It’s a simple concept for a game but an entertaining one and it’s surprisingly addictive.  It allows the player to take risks for greater prizes but also rewards caution.

At the bottom of the screen you can see the top third of a wheel containing the numbers 1 – 49 and then three special sections entitled RS, AS and AL.  In order these stand for Remove Strike, Advance One Step and Advance To The End Of The Level.  There’s a board game-like background to the rest of the screen featuring four sections separated by four locations.  Each section has six squares along which you must advance to the next location.

When the game begins you choose your stake and the wheel spins to give you a starting number.  Now you must decide whether the next spin is going to result in a higher or lower number than the current one.  If you are correct you move one space towards the next location; if not you receive one strike.  If you get two wrong in one section you will receive two strikes and that’s game over.

If you are lucky (or skilful) enough to reach the first location (Paris), you will win your money back if you have any strikes; no strikes means you win 2.5x your bet.  Here you can collect your prize or take the risk and carry on.  If you continue all strikes will be removed.

If you then make it to the next location (New York), you will either win the current stake or, if you have no strikes, 2.5x that stake.  The game carries on in this vein to the Great Wall of China and then back to London.

Around The World is perhaps more of a time killer than a chance to win big money but it looks great, it’s good fun and it’s eminently playable.  You can bet from £0.10 to £100 per go and it’s well worth a few minutes of your time.