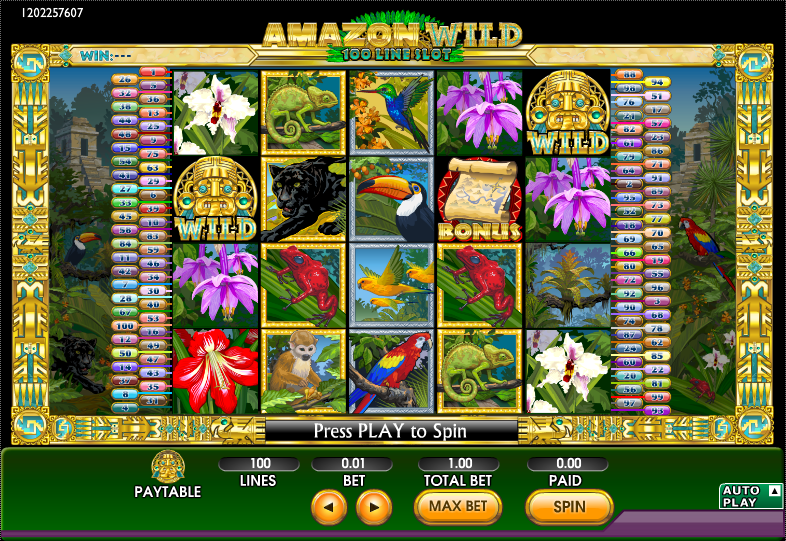 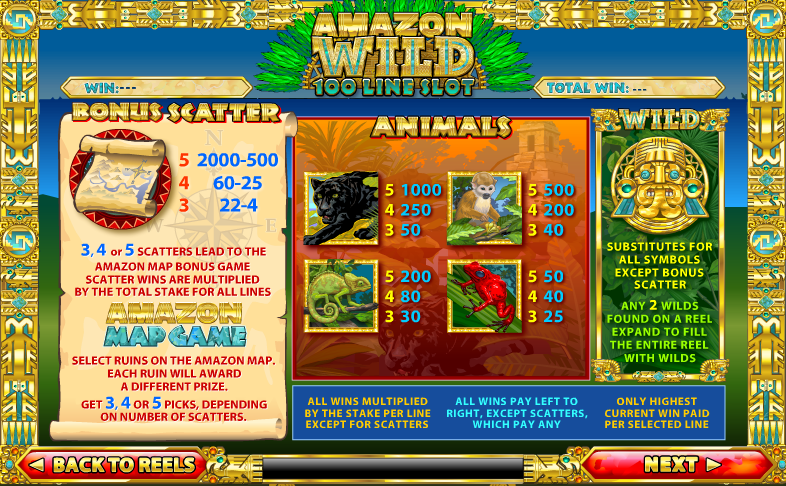 In a pretty crowded genre there’s always room for one more online slot with nature as it’s theme; Amazon Wild from Random Logic is one such game, featuring a glorious range of flora and wild animals as well as telling the tale of a ancient civilisations and lost cities.

Amazon Wild is a five reel slot which also features an impressive 100 paylines which means that virtually every combination of matching symbols is a winner on the reels.  Behind the reels on the screen we can see an Amazonian jungle scene with colourful birds in the foreground and the tops of Mayan pyramids above the treetops in the background.  There’s a lovely tropical birdsong soundtrack to keep you company while you play.

The symbols are divided into three categories as follows:

Special symbols are a map scatter which activates the bonus round and a god symbol which is wild.

The golden wild symbol is not just any old wild – if you can land two on one reel they will expand to cover the entire reel, giving you loads more opportunities to make winning combinations.

The Amazon Map game is the main bonus feature in this slot and it’s activated by landing three, four of five of the map scatter symbols anywhere on the reels in the base game.

A map will now appear and you task is to select ruins on that map with each one awarding a prize.  You will be able to pick three, four or five times depending on how many scatter symbols you landed when triggering the bonus.

It’s true to say that we tend to see better graphics on the latest slots these days but that shouldn’t detract from how playable this game is – it’s bright, colourful and it sounds good.  As an addition to the animals and nature genre it’s well worth a go.