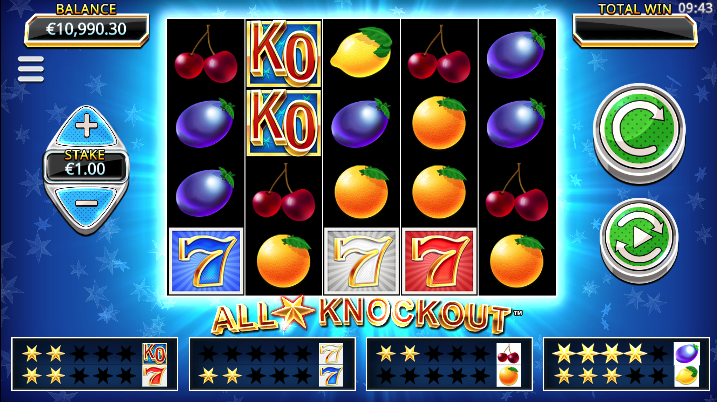 There’s a fruity theme to this sparkling online slot from Yggdrasil Gaming which comes with the title of All Star Knockout; it’s a game a retro feel that offers players base game bonuses and a clever main feature.

All Star Knockout is a five reel slot with four rows and twenty fixed paylines; those reels are surrounded by a blue glow emitting hazy stars as they drift away from the action. At the bottom of the screen are the Knockout boxes which are key to the main feature.

The symbols are a familiar bunch and include the ‘KO’, red, blue and white sevens and then a collection of fruit comprising cherries, oranges, plums and lemons.

The are no wild or scatter symbols in All Star Knockout.

During normal gameplay stars will land on the reels and when they do they’ll fly down and fill up a random position on one of the prize boards below the reels; when one board is filled up five free spins are awarded along with an extra two for any other boards filled at the same time.

The symbol for the board which is filled up will be removed from the reels while the spins are underway and a multiplier of between 2x and 5x is applied to any wins. Any more boards which fill during this round will award an extra two spins and remove that fruit from the reels as well.

This can occur randomly after any spin in the base game and a respin is awarded with a guaranteed win – respins will now continue until you land a non-winning spin.

The reels will spin and land enough bonus stars to fill up a prize board and trigger the All Star Knockout bonus.

All Star Knockout combines some fruity retro looks with a clever bonus feature and some base game extras and the result is a very playable slot which will tempt players back for more – highly recommended!