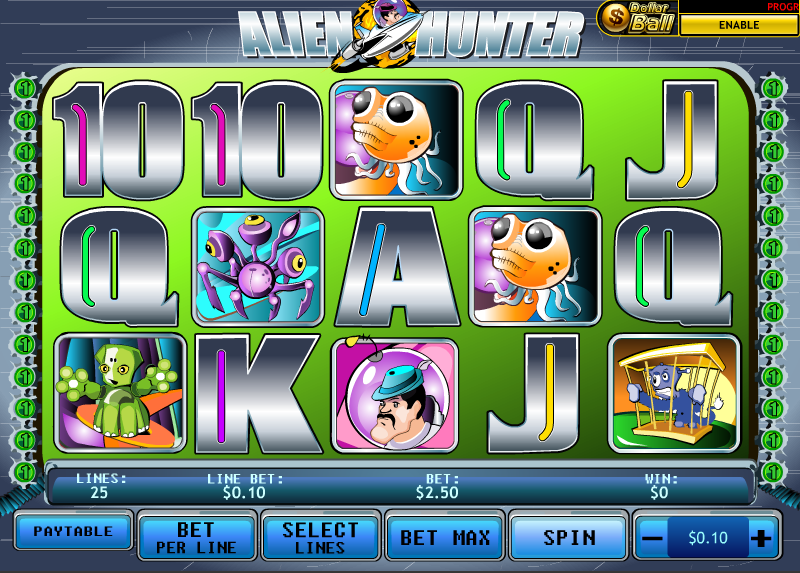 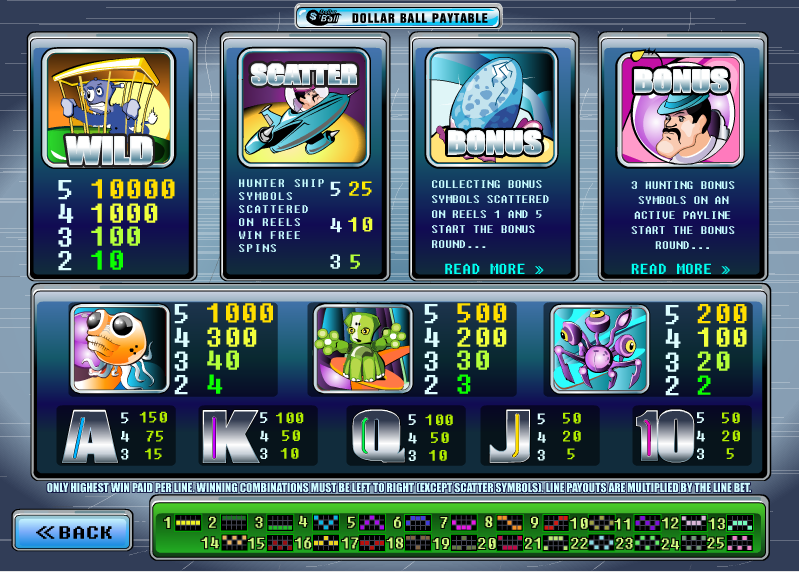 Alien Hunter is not generally something you choose as a career – it’s more something you drift into if the have the correct qualifications.  It mostly involves paperwork interspersed with brief moments of terrifying danger and it’s those scary times that the Alien Hunter online slot from Playtech is based upon.  The good news is that there’s also a progressive jackpot for those who aspire to the big bucks.

This slot features five reels and twenty five paylines and it’s a fairly basic but colourful game which introduces our nameless but moustachioed hero.  Aside from the basic playing card icons there are three different aliens as the main symbols – purple, green and orange.

Three different bonus features mean three different social symbols – a spaceship scatter, an alien egg and the man himself in a spacesuit.  A caged alien is the wild symbol.

So there’s an impressive three different features here and they are explained below:

The spaceship scatter symbol is the key to the free spins and three, four or five anywhere on the reels will win you five, ten and twenty five spins respectively.  There’s no multiplier here but you can re-trigger the spins from within this feature.

The alien egg must be landed anywhere on reels one and five and you’ll then be given the chance to collect some eggs.  Click on the eggs on the screen, collecting prize wins and multipliers until you find the bad ‘head jumper’ alien – the round is then over.

This is a game which can involve some all-too-rare user interaction and the round is triggered by landing three of the spaceman symbols on an active payline on the middle three reels.

You now have two choices as follows:

This is one of Playtech’s progressive jackpots and to opt in you need to click the ‘Enable’ button above the reels; each bet will cost you a little more but you’ll get to play a lottery-style game with a lottery-sized prize.

Just pick five numbers between 1 – 49 and on each spin a new draw will take place – 5 correct numbers will win the jackpot and 4 will win you 1% of it.

Always play the skill game when you trigger the Spaceman bonus – in our experience it wins more then the luck game most times.

This is a slightly simple-looking game but we can’t complain about a a lot with three different bonus features. The sound effects are also suitably alien-sounding.