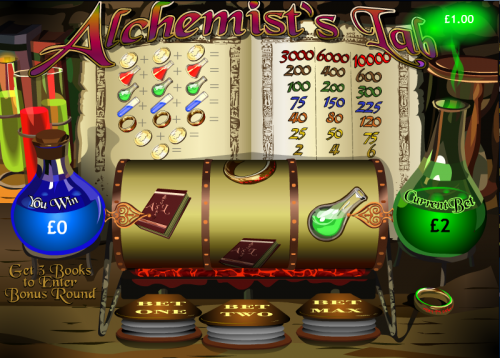 On this website we generally concentrate on the newer and more complex games; these are five reel, twenty plus payline machines with a variety of bonus games which offer a little something for everyone.  There is a market for a simpler type of game though and occasionally we step back from the more complicated games and take a look at some classic three reel, online slot machines.

Alchemist’s Lab is one such slot and it features three reels and just one payline; you couldn’t get much more basic if you traveled to Las Vegas and hunted down an old-style one-armed bandit. Alchemists’s Lab though is a simple slot with modern looks; it’s based of course on the science of Alchemy, the ancient belief that base metals could be turned into gold or silver and the symbols and background all reflect the accoutrements of an alchemist’s laboratory.

Books and potions sit aside the reels and the book of spells (which is actually the pay chart); underneath the reels there are three bellows which give you the option of betting on three different levels.

The symbols are coins, gold rings, spell books and blue, green and red potions and as we mentioned above there are three different betting levels.  You can wager £1, £2 or £3 per spin and that choice determines the cash prizes you can win.  For a £1 stake there’s a jackpot of 3000 coins for landing three gold coins.  Wager £2 or £3 and the jackpot rises to 6000 and 10,000 coins respectively.  That’s a possible £30,000 win!

Unlike most three reel slots, Alchemist’s Lab has a bonus game and this is triggered by landing three spell books.  You are then taken to a screen and shown a number of potions from which you must pick three; these will be combined to form a gold ingot of a certain size – the bigger it is the bigger the cash prize.

This slot is probably one for the purists but we think everybody should keep it simple every so often and spend ten minutes with just three reels and one payline.