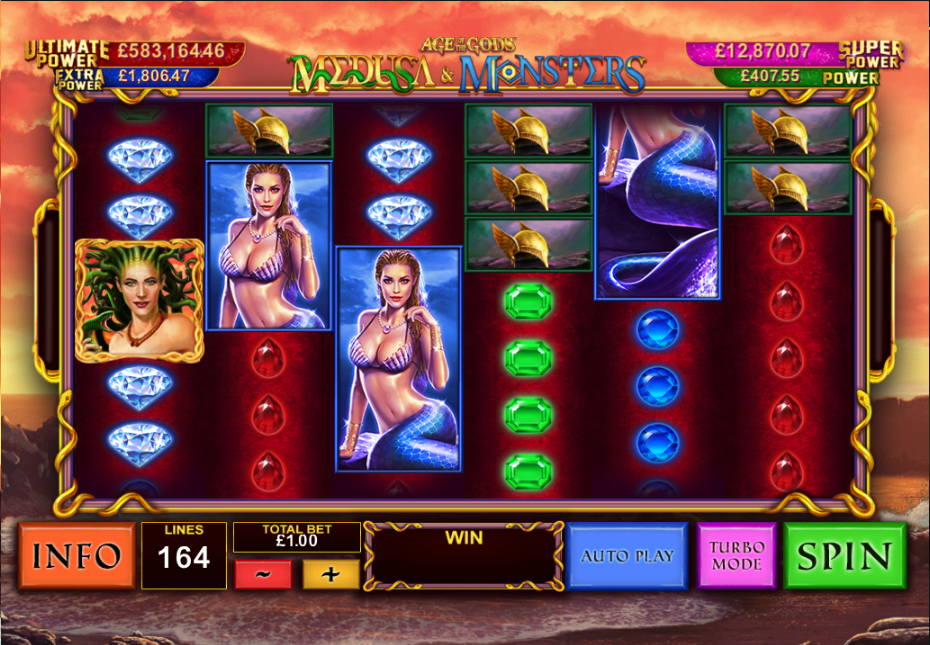 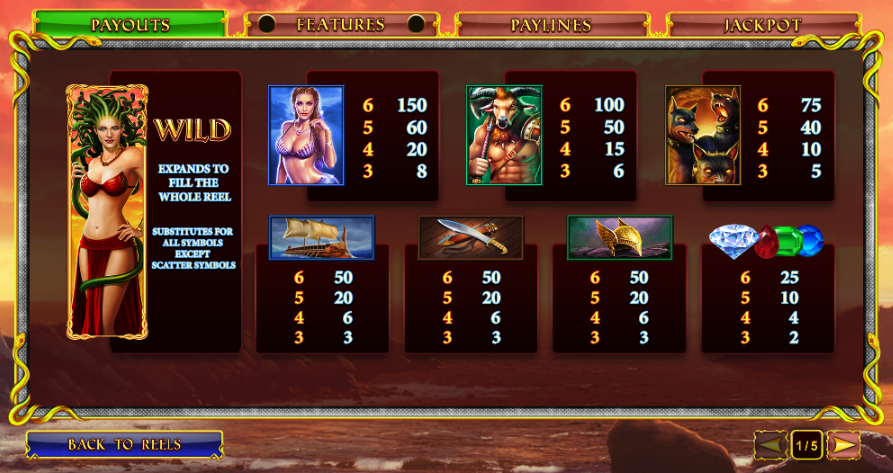 Playtech’s extensive Age of the Gods series of online slots has been catching the eye of many players for some time now and here we have one more to add to the legend; it’s called Medusa & Monsters and it’s themed on the snake-haired woman who could turn onlookers to stone with a glance.

Age of the Gods: Medusa & Monsters is a six reel slot with six rows and one hundred and sixty four fixed paylines; peer behind those gold-rimmed reels and you’ll see waves breaking on a rocky shore as the sun rises.

The higher value symbols include three characters from this story – the Siren, the Minotaur and Cerberus – along with a ship, a blade and Perseus’ helmet; a diamond and three coloured jewels represent the lower values.

Medusa herself is wild and when she lands she can expand to fill the whole reel; she will replace all others to help form winning combinations except for the stacked, mirrored shield scatter symbol.

This is triggered by landing three of the mirrored shield scatter symbols anywhere on reels two, four and six for which you will receive six free spins.

The first thing to do is pick one of the three shields on display which will reveal the Siren, the Minotaur or Cerberus – this symbol will lock in place every time it lands on the reels during the spins. At the same time the stacked Medusa wild will begin on reel six and move one place to the left on each spin – if it hits a locked symbol then that symbol will be removed.

Medusa & Monsters is part of the Age of the Gods progressive jackpot network and this is randomly awarded on any paid spin but the higher your bet, the more chance of it happening. When it does you’ll be taken to a screen displaying a 4×5 grid and you just have to select the coins on the grid until you find three matching – a win is guaranteed.

Medusa & Monsters is an enjoyable addition to the Age of the Gods series and of course it introduces this famous Gorgon to the reels; there are regular wins in the base game but the real fun is in the free spins, not to mention the progressive jackpot. The RTP ranges from 95.10% – 96.09%.