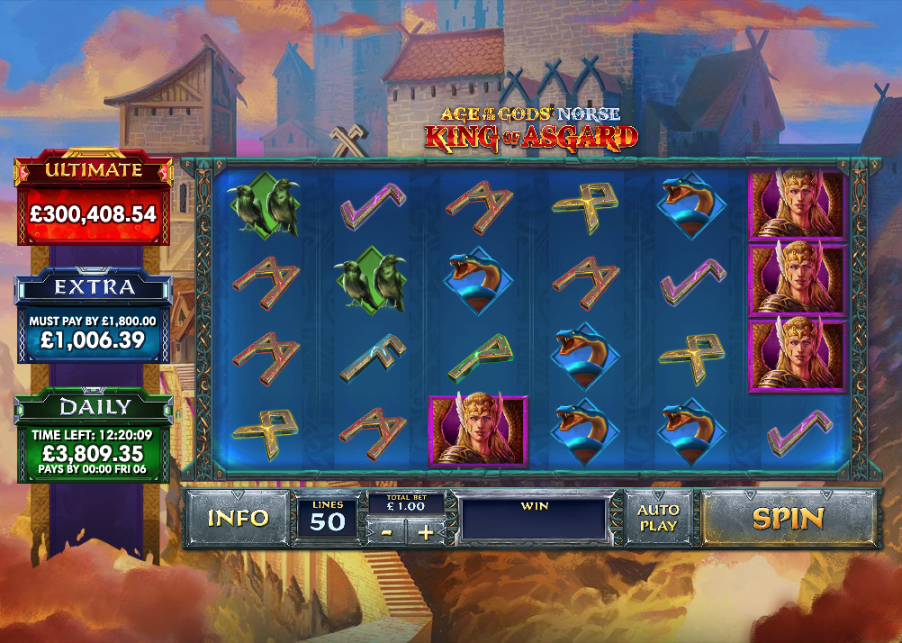 Asgard is regarded as the home of the Norse gods and the primary residence of Odin, Thor’s father; Age Of The Gods Norse: King of Asgard is an online slot machine themed on this mystical place and from £0.10 per spin it tempts players with stacked wild symbols, Odin’s Fury Respins and three progressive jackpot prizes.

Age Of The Gods Norse: King of Asgard is a six free slot with four rows and fifty fixed paylines; the crenellations and spires of Asgard emerging from the sunlit clouds form the backdrop to those reels as the progressive jackpot totals tick upwards on the left hand side.

High value symbols include various characters and creatures from this story while the lower values are five runes; Loki and Odin are both wild and can both appear stacked on the reels although Odin won’t land on reel one.

Age Of The Gods Norse: King Of Asgard Bonus Features

This is what we’re trying to trigger and it’s achieved by landing Odin fully in view on reels two, three, four, five or six; respins will now takes place in which the wild Odin will move one reel to the left with each spin. Each respin increases the win multiplier by 1x and if you can land Loki to the left of Odin he’ll be pushed back to the right one reel.

The round ends when Odin reaches the left hand side.

The Daily, Extra and Ultimate jackpots are won at random with any bet amount on any spin although a higher stake will increase the chances of winning the big bucks.

The roaming wild is not a particularly new feature but it works well here, especially when Loki gets involved to push Odin back to the right; add in the progressive jackpot and King of Asgard is a very playable addition to this fantasy series.